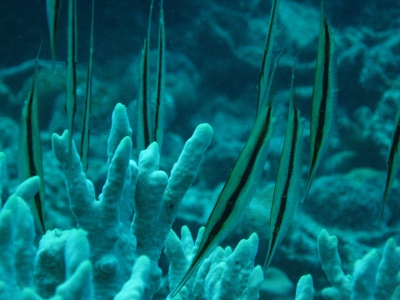 Facts about Black Razorfish, "Scientific name for Black Razorfish is Aeoliscus strigatus". The Black Razorfish, also called Coral Razorfish, Black Razorfish is a marine aquarium fish that belongs to the Shrimpfish family. It mostly originates from Indo-West Pacific all the way from the Coast of East African Indian Ocean to Seychelles and across to southern parts of Japan. Some of the Black Razorfish have also been spotted in Australia as well as along the subtropical waters of New South Wales. The Black Razorfish is significantly variable in color. In fact, Black Razorfishs color entirely depends on its habitat. Those that live among seagrass are often greenish-yellow whereas those that love living over sand or rubble sea floor have a light color with black stripes along their bodies. The body of Black Razorfish is covered with thin transparent plates. In the wild, this peaceful fish is often seen in schools among spines of Staghorn and Diadema corals in shallow waters ranging between depths of 3 to 65 feet (1m to about 20m).


The Black Razorfish mainly feeds on crustaceans, and only grows in summer, a time characterized by warm to hot weather and plentiful supply of food. During winter, though the Black Razorfish do continue to feed, they do not grow considerably much, they may only increase in size by a few centimeters throughout the year until the onset of the next summer. The maximum size that can be attained by the Black Razorfish is 8 inches (20cm). Spawning occurs during summer when the males release sperms which are then collected in the females’ gills. Once the eggs have been fertilized, they are released into the sea where they hatch into free-swimming planktonic larva.

Search the Web for More information on Black Razorfish at LookSeek.com Search