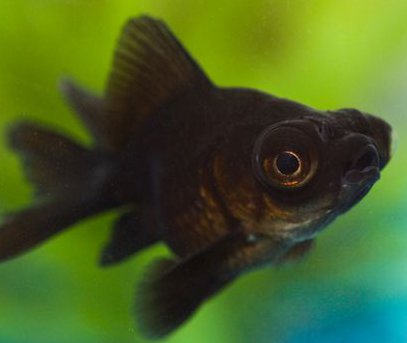 Facts about Black Moor Goldfish. "Scientific Name for Black Moor Goldfish is Carassius auratus" Type: Cyprinids. Family: Cyprinidae protruding eyes (bug eyes). In Moscow in 1941, aquarist P. Andrianov, breed a black telescope goldfish with a ruby-red eyes. Young Moors resemble bronze fantails. The Black Moor Goldfish is a telescope-eyed combo of fancy goldfish that has a pair of protruding eyes. The black Moor have deep egg shaped bodies with beautiful long flowing fins. They are also called telescope, popeye, in Japan called kuro demekin and China dragon-eye. They can grow up to 10 inches (25 cmk) in length Will not lose their velvet-like appearance with age. The black Moor goldfish lives between 5 to 25 years). Black Moor demekins may also change back to metallic orange when in warm water temperatures. They have a deep dark black almost velvet-like appearance and sometimes loose this color to become a more light greyish and bronze color. Most Black Moor goldfish will not stay pure black forever and many of the Moor goldfish fish change colors from a rust color on the bottom of their belly, to orange splotches. Their eyes are usually fairly big and their vision is pretty poor and they can injure their eyes with objects with sharp edges in your aquarium because of the eyes standing out of their heads so much.
Black Moor goldfish are popular because their black color cool looking in your fish tank, from the more common gold color of the common goldfish. Goldfish are usually fairly easy to care of, Black moors are able to withstand a wide variety of water temperatures. Recommended is to not expose these goldfish to cold temperatures for long periods. They con co habitat well with other fancy goldfish varieties.
Because the Black Moor Goldfish get large a 30 gallon aquarium tank minimum recommended. They usually are bottom feeders and love digging, Gravel coffee been size is good so they don't swallow any gravel by mistake. Fake plants are the best. You can keep Black Moor Goldfish with bubble eyes, fantails and telescope eyed fish or similar species in an aquarium.
The Black Moor Goldfish are egg layers and the eggs need to be removed from the aquarium or put in the aquarium in a cardamon off place from being eaten by the parents.

Search the Web for More information on Black Moor Goldfish at LookSeek.com Search