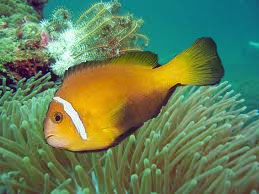 Features of the Black Fin Clownfish

The Black Fin Clownfish is a member of the Pomacentridae, related to other clown-fishes and damsel fishes. This fish is named for the black edge on its bottom fins that distinguish it from the orange and white striped common clown fish. They have an oval body. While the common clown fish has three or four vertical white stripes, the Maldives clown fish has a single vertical stripe not far behind the eyes. It has a dark orange or reddish-orange color.

Feeding of the Black Fin Clownfish

The Black Fin Clownfish are omnivore, (definition-they eat both other animals and plants). In the wild, they eat plankton, algae and crustaceans. In the fish tank, they eat granular fish foods, high protein fish flakes, mysis shrimp, brine shrimp and chopped clams. In the wild, it will even eat undigested food left behind by the anemone.

About the Black Fin Clownfish

The Black Fin Clownfish one of the few species where the female is larger than the male. The female grows up to five inches (12 cm) long, three and a half inches (8.9 cm) for the males. The dominant individual in the group is the only female, with the second largest individual being male. When the dominant female dies, the next largest Black Fin Clownfish individual becomes female while one of the sexually immature individuals becomes male. Small groups live together.

How the Black Fin Clownfish lives

Test the water when preparing your tank for your Black Fin Clownfish: You will need to purchase a liquid tester so that you can test for Nitrates and Ammonia. The strip-style test kits are unreliable and a waste of money. You should use a dechlorinating product to remove the harmful chlorine from the water. Test for nitrite, ammonia, and proper PH. The ammonia should always be 0, the nitrite should be 0, and the nitrate should preferably be below 20 ppm. If it's at or above 40 parts per million (ppm), you have too many fish or are not changing the water often enough. Cycling your tank is important, Follow the steps to cycle your tank. This establishes healthy bacterial and chemical levels.
Remove 30% of the water from your Black Fin Clownfish tank each month with new water, or a 15% water change every 2 weeks is ideal for keeping nitrates lower. With corals in the fish tank, then 20% water change every month, or 10% change every 2 weeks.

Search the Web for More information on Black Fin Clownfish at LookSeek.com Search