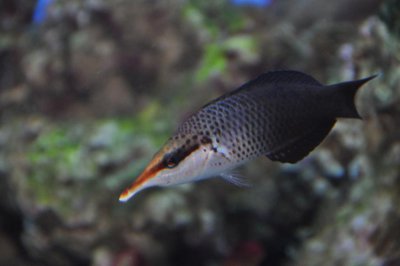 The Black Bird Wrasse is not a bird at all; instead, it is a salt-water fish. It is native to the Red Sea and Indian Ocean.
These fish vary in size and color based on gender. Females are about six inches in length while males grow up to fourteen inches long.

Its scientific name is Gomphosus varius. It is also called the bird fish, Red Sea bird wrasse, Indian Ocean bird wrasse, blue bird wrasse and several other names. These names arose form the fish’s bird-like snout. Females are blue and brown, while males tend to be green in color.
Each bird wrasse species has its own coloring scheme for juveniles that shift to a different pattern as adults. The black bird wrasse is dark blue or black.

The wrasse will leap out of the water if it can. Keep the aquarium covered. It constantly swims. The wrasse doesn’t bury into sand to sleep but simply rests over the sand if it doesn’t find shelter in the rocks.

Blackbird wrasse fish have a dominant male controlling a harem of females. If that male dies, the next largest or strongest female turns into a male. If a female migrates away from the group, it may also turn into a male. If you have an aquarium, only have one male. If you will have a male and a female, introduce the female first and let her establish a territory before adding the male.
This fish should be kept in 100 gallon aquariums in the least. Don’t put it in a reef tank.

The Gomphosus varius is a predator. Do not house it with smaller fish that it would consider food. The wrasse isn’t limited to prey that fit in its mouth; it will catch a smaller fish before beating it to death on the rocks and eating the pieces.

The black bird wrasse eats brine shrimp, mysis shrimp, frozen silversides, sliced clam and other meaty foods. They can be fed marine flake and marine pellets in addition to the meaty foods. You should feed this predator three times a day.