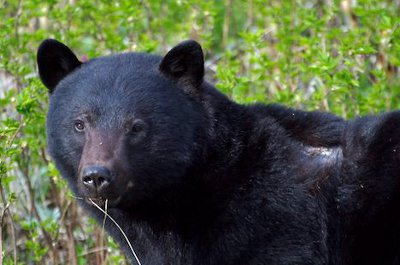 Black bears are average-sized bears, with a body length, ranging from 4 feet to 7 feet (1.21 to 2.13 meters), measured from snout to tail, and 2 feet to 3 feet (.60 to .91 meters) height at the withers when fully grown. Usually, male Black Bear are bigger than the females. The eyes of Black bears are small, and they have rounded ears, an elongated nose, big non-retractable claws, a small tail, and bushy hair. Nearly all black bears have a true black color body, unlike black bears seen in western states that can appear with shades of brown red or blond.

Black bears are extremely adaptable, and occupy a bigger range of homes than any type of bear in the world. The home of these bears must have access to water, food, cover, and denning. Even though black bears are considered to be mature forest varieties, they habitually use a diversity of habitat types. Generally, these bears are solitary, but sows will look after the cubs. Mature bears may be found together during the breeding period and rarely yearling siblings will stay together for some period of time. They may also get together at places with plentiful food resources. Trees provide a comfortable spot for napping or a sfe haven when threatened.

Black bears are omnivorous and they have an extremely different diet. They feed on herbaceous plant parts, forested plant parts, flower, nectar, or pollen, fruit, young and small animals, terrestrial insects, young and mature amphibians, and carrion. The Black Bear are opportunistic feeders, feeding mostly on plants in the spring, insects and berries in the summer, and berries and nuts in the fall.

The average lifespan of the Black Bear breed ranges from 26 years to 30 years.

Search the Web for More information on Black Bear at LookSeek.com Search