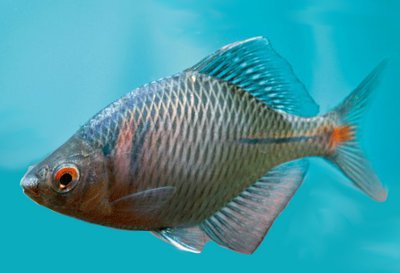 Facts about Bitterling Fish. "Scientific name for Bitterling Fish is Rhodeus amarus". The Bitterling Fish can be either a pond and aquarium fish. Bitterling Fish are carp-fish-like in their looks. Mainly found in China but also in Taiwan, in both ponds and inland rivers. Bitterling Fish or (Rhodeus sericeus or Rhodeus amarus) The Bitterling fish, the Scientific name for Rosy Bitterling is Rhodeus ocellatus, is a genus of cyprinid fish, consisting of 21 species called bitterlings. The scientific name comes from the Greek word rhodeos, which means "rose".
If its an aquarium you want for the Bitterling Fish, than get at least a 30 gallon tank, with a good amount of plants, plastic is good, but try to get some real plants to mimic their wild environment. Get rocks and ornaments for good hiding places, gravel or sand is acceptable for a substrate.
Bitterling Fish are very good for ponds with a large koi population. They will eat the parasites that infect the koi fish, especially anchor worms. The Bitterling Fish are very active fish that will also feed upon insect larvae and will help in controlling mosquito's just like the Mosquito fish, in outside ponds and water garden.
The Bitterling Fish will spawn into the covering of calm freshwater, where they will incubate. Females Bitterling Fish develop a tube with which to deposits eggs into the inhalent syphon of the mussel. The male releases his sperm and they are sucked inside to fertilise the eggs. The fry remain inside the mussel until hatching. For aquariums and or your pond, provide a number of Bitterling Fish in the same aquarium or pond to allow them to pair off for mating. After the fry become waterborne, feed them newly hatched brine shrimp until large enough to eat other foods.
In an aquarium the Bitterling Fish needs to be fed a good variety of foods such as vegetables as well as meaty foods. Feed a quality flake food as well as live,freeze dried, and frozen foods such as brine shrimp, Artemia and bloodworms.
Bitterling fish grow to approximate 2-1/2" to 3-1/2 inches (6.3 to 8.9 cm) in size. Neutral or slightly alkaline conditions are are ideal conditions and the Bitterling Fish will easily adapt to harder water.
Bitterling Fish are short-lived fish, generally surviving only about 5 years. Bitterling Fish inhabit slow-flowing or still waters, such as marshes, lakes, ponds, lakes, and river backwaters. Because they depend on freshwater mussels to reproduce, their range is restricted.

Search the Web for More information on Bitterling Fish at LookSeek.com Search