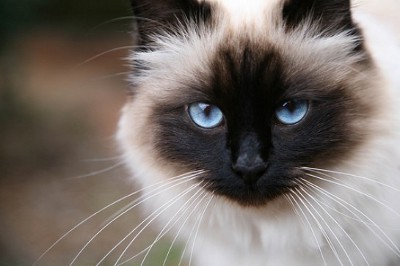 Facts about Birman Cat "Scientific name for Birman Cat is Felis Catus". "Birman Cat" breeds are medium sized in body and have a broad face. The Birman Cat nose structure is what can be termed as a Roman nose. The Birman Cat ears are wide especially at the base and they are also tall. The eyes on the other hand are rounded and sapphire blue. Birman Cats can see at levels of light six time lower than a human, this is why cats can catch mice so easily at night. Birman Cats outer ear uses 32 muscles to control it, and a human has only 6 muscles in its ear and a cat can move its ears 180 degrees. A Birman Cat can move their ears independently. Birman Cats have very sharp hearing and their sense of smell is fantastic.


Description
The fur of the Birman cat is medium in length and has a relatively silky texture. Contrary to the Himalayan and Persian breeds, the Birman Cats do not have an undercoat and as such they are less prone to matting. The Birman Cat color of the coat is almost always pointed except for the contrasting symmetrical gloves that are pure white on either pawl. This is the trademark of the Birman Cat breed.

The white of the Birman Cat is in every toe and stops at the articulation of toes to metacarpals. The gloves extend further up the leg on the back side which is known as laces. The body color of the Birman Cat ranges from white to cream. The Birman Cat also comes in colors such as chocolate, lilac, seal, blue and red. More other colors are still being developed as the cats continue interbreeding.

Genetic Diversity
According to a study conducted at UC Davis, the team doing the investigation led by Dr. Leslie Lyons found something very interesting concerning the Birman Cat breed. They discovered that the Birman Cat is one of the breeds with the lowest levels of genetic variation among the breeds sampled.

Health
The Birman Cats are threatened by a heart disease known as hypertrophic cardiomyopathy (HCM). It is common in cats and is usually inherited in the genes. It is a progressive disease and on the extreme, it can result into cardiac arrest, paralysis of the hind set of legs because of clotting. This disease has also been attributed to the death of a number of Birman Cats.

Temperament
The Birman Cats are very social and tend to bond well with their owners. They are very observant and quiet in composure.

There are over 500 million domestic cats in the world and 88 million in the United States Approximately 40,000 people are bitten by cats in the U.S. annually. A Birman Cats jaw can not move sideways, there for a cat can not chew large pieces of food. A Birman Cats back is highly flexible because of its 53 loosely fitting vertebrae. The body of a cat has 230 bones. While a human body has 206. Compared to a humans who only have 34.
Birman Cats on average sleep 13 to 14 hours a day and when they are awake, the spend a lot of time liking themselves to keep themselves clean. Birman Cats help control rodents like small rats and mice where the live homes, warehouse, ect. A female cat is called a "queen or molly", male cat is called a "tom" and the name "clowder" is called a group and young or baby cats are called kittens.
Birman Cats have an average weight around 8.7 to 11 pounds (3.9 to 5 kg). Cats average life span is around 12 to 15 years. The reason why Birman Cats can squeeze through very small spaces is that they have no collarbone and free-floating clavicle bones that their shoulders are attach to their forelimbs, that's why a Birman Cat can fit through a hole the same size as its head and they use their whiskers to determine if they can fit through the space.

The cat's hairball is called a "bezoar" (meaning a concretion or calculus found in the intestines or stomach of certain animals, in particular ruminants, formerly alleged to be an effective cure for poison). A Birman Cat can climb up a tree well but can not climb head first down a tree, because all the claws on a cat’s paw points the same direction, to get down from a tree, a Birman Cat has to back down. A Birman Cat can run at a top speed of about 30 mph (48.2 km) over a short distance. The average Birman Cat temperature of a cat is 101.5 °F. A Birman Cat rubs against a person to not only to be affectionate but also to mark out its territory. A Birman Cat does not like water because its fur is not insulate it well when it gets wet. A Birman Cat averages about 12 whiskers on both side of its face. The average Birman Cat temperature of a cat is 101.5 °F. The Birman Cats heart beats at 110 to 140 a minute, That is almost twice as fast as a human heart. A Birman Cats has 30 teeth while a kittens has about 26 teeth that they will lose at about 6 months of age. A Birman Cat has the ability to jump up to six times its length.

Search the Web for More information on Birman Cat at LookSeek.com Search