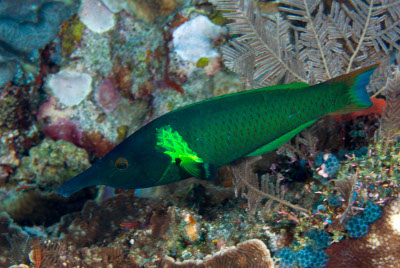 Bird Wrasse is a variety of wrasse type fish that comes from the Labridae family. These fish varieties hail from the western parts of the Pacific Ocean and the eastern parts of the Indian Ocean. They usually occur on coral reefs at a depth between 3.3 feet and 114.8 ft. Juveniles are occasionally found in sea grass. This fish variety is of minor importance to the home commercial fisheries and can be mostly found in the aquarium business. When kept in an aquarium, these fish breeds prefer a tank with a minimum capacity of 125 gallons, with the temperature of the water, ranging from 72 degree Fahrenheit to 78 degree Fahrenheit, with the water pH levels between 8.1 and 8.4.

The most exceptional feature regarding the Bird Wrasse fish breed is its lengthened beak that the fish uses to catch lengthy, thin prey and hold it imprisoned while fragmenting it into bite-size portions. This fish breed is a tropic expert that uses its extended jaws to grab tiny benthic crustaceans as well as alpheid shrimps and crabs, mollusks, brittle stars and small fish from coral and rock-strewn crevices.

Bird Wrasse fish breeds are carnivores, and in the aquarium, they are fed with vitamin-rich frozen brine shrimp, Mysis shrimp, and other flesh foods together with a high-quality sea flake and sea pellet food.

Though no authorized information was found about the lifespan of the Bird Wrasse fish breed, generally, all wrasse varieties survive between three years and five years.