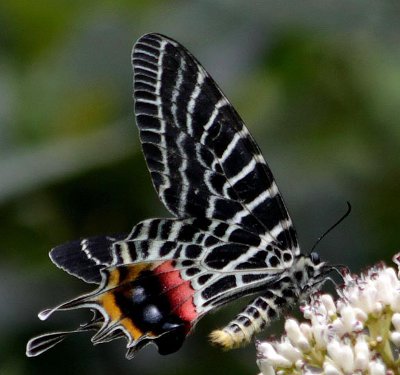 The Bhutan Glory butterfly has a dull black color body, with slender, curly, cream-colored striations running perpendicularly across their wings. Both males and female Bhutan Glory Butterfly in the species are identical in appearances, having elongated round front wings with convex termen and several-tailed back wings. On the top of the back wing, the butterfly has a prominent, huge tornal patch with yellow to orange color lunules bordering their tails, inner bluish-black color patches with white color ocelli and a pink post-discal band on the inside edge. Beneath the back wing, the Bhutan Glory Butterfly has gray as the base color and the striations are marked and the colors suppressed or paler. The upperside of the wings of both genders of Bhutan Glory butterfly is dull black.

The front wing of the Bhutan Glory butterfly has the following ochraceous white-colored slender markings. There are base, sub-base, median and preapical stripes run from costa across the cell. The base, sub-base, median lines are continued in a sequence of approximately diffuse arcs to the dorsal border, and the preapical line ends at the third vein. Beyond the apex of the cell, a fairly broken oblique line runs from costa to the third vein, followed by a full discal oblique line. There is a short, slightly ill-defined upper postdiscal line, which ends on the fourth vein and a sub terminal full line. All the lines excluding the lines that cross the cell formed of a sequence of short curved stripes in the interspaces.

The back wing of the Bhutan Glory butterfly appears with analogous ochraceous white stripes almost in continuance of those on the front wing with the accumulation of a wide line along the first vein and the median vein. These two stripes do not contact much ahead of the base of the fourth vein. The Bhutan Glory Butterfly wing has a huge minor discal patch, the pink-colored inner half, the soft-black colored external half, followed by wide sub terminal bright yellow-colored lunules in the first to the fourth inter-spaces.

The tail of the Bhutan Glory butterfly has an extremely narrow edge, with ochraceous white in color. The black color on the external half of the discal patch is found in the first and second inter-spaces. The extremely huge ill-defined superposed white color spots are densely shaded with brownish grey color except down the inside margins.

The underside of the Bhutan Glory butterfly is similar, with broader markings. The base of the cell in their back wing is crossed by a small ochraceous-white color bar, and the borders of the pre-costal cell are crossed by with narrow stripes of the identical color. The Bhutan Glory Butterfly have black colored Antennae black and their thorax, head and abdomen appear with dull black in color.

The Bhutan Glory butterfly has a practice of hill-topping and visiting flowers of different food plants and feeds on their nectars. The caterpillars feed on the leaves of a variety of food plants.

When caterpillars become fully grown they will attach to an appropriate leaf or small branch, than they will shed the outside layer of their skin and a hard skin underneath known as a "chrysalis" will be their new look
An adult Bhutan Glory Butterfly will come out from the "chrysalis" than it waits a few hours for its wings to dry and fill with blood, before it takes its first flight.

Search the Web for More information on Bhutan Glory Butterfly at LookSeek.com Search