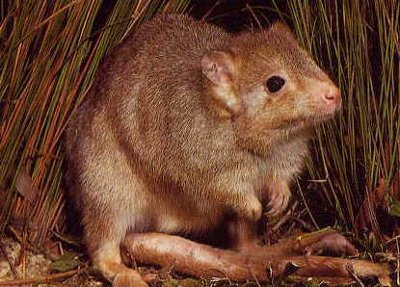 Facts about Bettong. "Scientific name for Bettong is Bettongia lesueur". The bettong is probably the most distinctive type of species of the rat kangaroos. The bettong have five known species that have spread widely across the grassy woodlands and the dry open eucalypt forests. The five known species include the eastern bettong, the boodie, Wolyie Nanullar dwarf bettong and the northern bettong.


Bettongs are known to grow up to two kilograms in weight. They are brown-grey in color above their body, while its pale grey on its lower parts of its body. The Tasmanian Bettong is known to be smaller, marsupial. It tends to resemble a slim and delicate kangaroo. The species have their hind legs well developed in addition to their hind feet which are strong and long. This allows the Bettongs to hop with ease as they move very fast.

Other species of the Bettongs have their fore limbs shorter and muscled. Their claws are also shorter. This adaptation helps them in digging.

The tail of the Tasmanian Bettong is a bit prehensile. In addition, it is in the same height as its body, with a noticeable white tip at the end. On the other hand, the tail of the in comparison, the tail of the potoroo is significantly shorter. This type of the Bettong species has round short ears, with a naked nose.

It is important to note that the Bettongs like the dry free eucalypt woodland forest in addition to the grassy woodland. However, the brush-tailed Bettongs may be found in several different habitats, desert grasslands to temperate forest.

Most species of the Bettongs are often found in low woody shrubs and the clumped under storeys of woodland grasses.

Bettongs are known to be nocturnal in addition to their ability to live in nests. The Bettong make their nests by gathering all their necessary nesting materials. They normally travel a distance of up to .9 miles (1.5 kilometers) from their nests in search for food which includes insects, bulbs, seeds, and roots. Most Bettongs have remained moderately popular in conducive habitats.

Search the Web for More information on Bettong at LookSeek.com Search