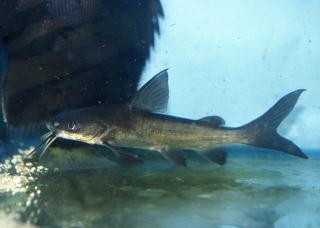 Berney's Catfish is a freshwater, marine catfish that comes from the Sea Catfish family. These fish varieties are usually maintained in aquariums with vast swimming spaces. They are called by other common names, such as the High fin catfish, Berney's shark catfish, Neoarius Berneyi and Salmon catfish. These fish are non-violent varieties and they are native to the South Pacific. Berney's Catfish breeds are largely found around the areas of the South Pacific coast of the Northern part of Australia and New Guinea. These fish varieties also live in the coastal rivers and streams of the Gulf of Carpentaria, as far as the western part of the Mary River system. Usually, these fish breeds prefer a tank with a minimum capacity of 185 gallons, with the temperature of the water, ranging from 73 degree Fahrenheit to 79 degree Fahrenheit, with the water pH levels between 8.0 and 8.3.

The Berney's Catfish breed is capable of attaining a maximum body length of 15 inches, with the weight of 18 pounds. These fish varieties resemble the appearance of the Neoarius Graeffei fish variety, but with a taller dorsal fin and a smaller eye. They have a stout body, with a bony head shelter. They appear with a circular, pointed nose, and relatively large eyes. The mouth of the fish is accommodated with three pairs of extended barbells, and pectoral and dorsal fins with healthy toxic spines. The palatal teeth areas are approximately of the same size, bigger inside than outside. This fish breed has an overall body color, ranging from silvery bronze to a shady gray, with a pale-colored underbody.

The Berney's Catfish breeds are carnivores, and they usually feed on benthic crustaceans, aquatic plants, insect larvae and bottom detritus in the wild. In the aquarium, they are fed with live and frozen foods, meaty foods and dried-algae. However, they feel affection for the flavor of flake foods and bloodworms.

The average lifespan of the Berney's Catfish breed is more than 60 years in the wild.