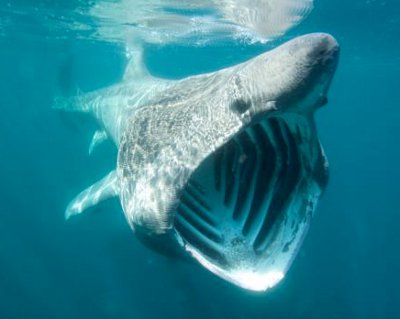 Facts about Basking Sharks, Scientific name for Basking Shark is Cetorhinus maximus". The Basking shark is extremely large and a mysterious fish. The Basking Shark will grow up to lengths of 35 feet (.30 meters) or more which makes them the 2nd largest fish in the entire ocean; just second to the whale shark.

Even as big as they are, the Basking Shark are extremely elusive making it very difficult for researchers to have more knowledge about them.

The Basking shark is a massive shark that can be easily be identified by its size. Its mouth is very unique, extremely large; Basking Sharks can be well over 3 feet 3 inches (1 meter) in width. With their big size one would expect the Basking shark to have long and pointy teeth like the tiger or great white shark; this is rarely the case as the Basking Shark have several rows of diminutive teeth. Basking Sharks large mouth size and small teeth size coincides with the Basking shark’s unexpected diet. They will keep their mouths open as they swim and feed on the plankton in the water.

One thing that is greatly known about this species of fish is their diet. Many will definitely assume due to the Basking Shark massive size that they eat animals like the seals or other fish or any animal they surely come across, this is not certainly the case their favorite food source is zoo-plankton; small tiny animals found at the surface of the ocean.

Basking shark will prefer water that ranges from cool to warm temperatures. They will prefer to swim close to the shore and near the water’s surface hence heir nickname “sun fish”.

The Basking Shark often travel through waters of Atlantic Ocean, Mediterranean Sea, the Sea of Japan, near Southern Australia and New Zealand. They are easily spotted at the coastline of Nova Scotia and the New Brunswick.

The Basking Shark are known to travel alone but at times they can be found in groups of around 100 sharks.

Next time you happen to see a massive shark almost 3 feet 3 inches (1 meter) wide and it swims with its mouth wide open, it just might be the Basking shark.
There are over 400 types of sharks, Sharks have the most powerful jaws on on earth. Basking sharks jaws, both the upper and lower jaws move. Basking sharks skin is made of denticles instead of scales like other fish. The denticles are constructed like hard, sharp teeth (tooth-like projection) and this helps to protect the Basking shark from being injury. "Scientific name for Shark Selachimorpha"
"Fear of Sharks Selachophobia".

Search the Web for More information on Basking Shark at LookSeek.com Search