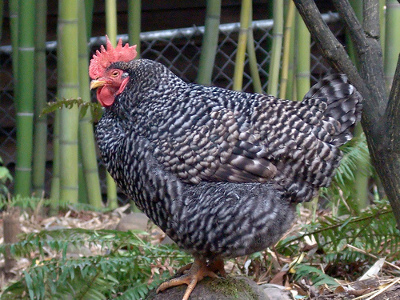 Facts about Barred Rock chickens. Barred Rock chickens are casually referred as “rocks” in breeder world, premiering in New England in the mid-1800s, Barred Rock Chickens are a cold hardy breed and considered to be ideal for the small individual farms. The American Standard of Perfection recognized as a distinct pure chicken breed in 1874. They are favorite chickens of small backyard flock owners. The Barred Rock chicken name comes from the grayish rock pattered feathers. It is eerily identical to the barred rocks. The breed is often confused with Plymouth Rock chicken which are one of the extended family of the barred one. Developed in America in the middle of the 19th century and was first exhibited as a breed in the late 1860s. Its been said of crossing Cochin, Dominique, Java, and perhaps Dorking and Malay. The Breed became popular very rapidly, and in fact, until World War II, no breed was ever kept and bred as vigorously as the Barred Plymouth Rock. The Barred Rock chicken is the oldest and first member of the Plymouth Breed.

Barred Rock Chickens are adaptive to changing climates and weathers. However, they seem to survive and lead a healthy life in cold climates. This makes the advantage point for small firm owners as they usually can’t afford the temperature controlling systems. Apart from that, chicks stick together to keep themselves warm in poultries having large flocks, but a few chickens in a coop can’t resist the cold weather for a long time.

The Barred Rocks live a quite longer life. The hens can grow up to 6 lbs (2.7 kg) and the Roosters up to 9 lbs (4 kg). Although it is considered as a dual purpose bird, it becomes either a good egg layer or a good source of meat.The Barred Rock chicken is recognized by its trademark red face and earlobes. It is a friendly breed and doesn’t show attacking attitude, even towards humans.

The Barred Rock chickens have average sized single comb. The hen should be allowed to live as much as possible egg laying days before it is taken for meat. However, they are consumed for meat at an earlier stage, so their real egg laying capacity is hardly known. The eggs are of average size, brownish pink in color.

Search the Web for More information on Barred Rock Chickens at LookSeek.com Search