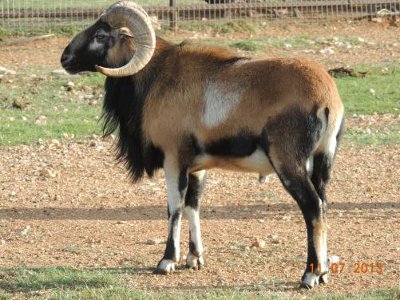 The Barbados Blackbelly Sheep were imported to U.S. initially in the year 1904. American Black Bellied Barbados breed was breed then got crossed with the European breeds and also Mouflon and Rambouillet. This breeding has resulted in American Black Bellied Barbados to have features and characteristics that are much different from the breed that is found in the Caribbean area. The Barbados Blackbelly Sheep were used in U.S. for mainly two things. They were used in the form of game or trophy animals in Texas. Rams of this breed were expected to have large horns which made them popular and lovely in U.S. They were used in trails with sheep dog and they are agile and can run for the whole day.

Milk from Sheep is mostly used to make gourmet cheese. A Barbados Blackbelly Sheep has an average body temperature of about 102.5˚F (39.1˚ Cel).
A lambs is usually sold on average for meat between 90 to 120 pounds (41 to 54.4 kg). "Mutton" is the name of the meat from a full grown sheep. There is a split in the sheep upper lip which allows them to select their favorite leaves off a plant. A Barbados Blackbelly Sheep has a life expectancy between 6 1/2 to 11 years. Milk from sheep has a higher level of zinc, calcium, protein, fat, riboflavin, thiamine and niacin than milk from cows or a goat.
A Barbados Blackbelly Sheep is a herbivores, that eats leaves, grass, hay and furns. A sheep has four chambers to its digestive system that helps break down what they eat. Barbados Blackbelly Sheep are "Ruminant" is any hoofed even-toed, mammal that digests its food in two stages. First by eating the raw materials and regurgitating a semi-digested form known as "cud" (ruminating: chewing the cud.) then eating the cud.

Search the Web for More information on Barbados Blackbelly Sheep at LookSeek.com Search