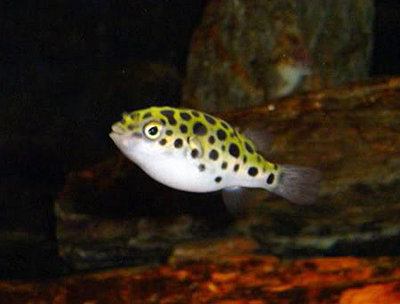 Facts about Banded Puffer fish. "Scientific name for Banded puffer is Tetraodon fahaka". There are about 120 Puffer Fish species in the world. Most Puffer Fish are found in most tropical oceans of the world. Around 29 species of Puffer Fish are found in freshwater and 35 types of puffer fish can be found in brackish waters. Puffer fish belong to the Tetraodontidae family and they are one of 10 families in the Tetraodontiformes order. The Banded Puffer fish can sometimes be referred to as Globefish, Blowfish and Balloonfish and also Honey Toady, Sugar Toady, Toadies and Sea Squab. The fish originates from tropical conditions with temperature ranges from 72 to 78 f degrees (23 to 26 degrees Celsius) in Brackish and Freshwater Banded Puffer fish lakes and the marine waters of the coast in Africa and extending as far west as the western Atlantic to the Amazon River in Brazil and Gulf of Paria. In their natural aquariums, the fish can be found at maximum depths of 130 feet (40 meters).

Features about the Banded Puffer fish

The Banded Puffer fish has a dark green colored body with six black cross and white ventrally bars. It can develop and grow to heights of about eighteen inches. However, it usually grows to rather smaller heights of ten to twelve inches. The male juveniles experience a rapid growth and can grow to attain optimal lengths of approximately 11 inches (29 cm) although their common length is usually 10 inches (25 cm). The fish dark brown fins with eleven to twelve dorsal soft rays without dorsal spines and eleven anal soft rays. The body of the fish is covered with prickles except for the pectoral base, snout and the tail or the caudal peduncle. Its teeth are coalesced into plates on separate jaws and the nostrils have two openings.

Diet of the The Banded Puffer fish

Banded Puffer is a carnivore and can feed on frozen and live meaty foods which include shrimp, cockle-in-shell, earthworms, mussels, crabs legs and snails.

The Banded Puffer has been successfully bred in aquaria although it is extremely rare, which is greatly contributed by aggression. The event has discouraged several people from breeding the fish. The water requires to be kept at constant temperatures of 72 to 78 f degrees (23 to 24 degrees Cel) and the pH around soft to medium to neutral. It is important to note that the fish can be very aggressive and just like other puffers with formidable, the fish can attack other fish species in the tank based aquarium. The average tank is 30 gallons (113 liters)
The average life span of the Banded Puffer fish is about 10 or more years.

Search the Web for More information on Banded Puffer Fish at LookSeek.com Search