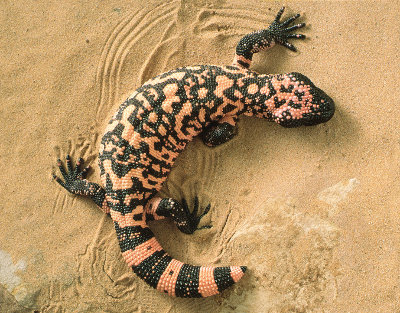 The Banded Gila monster is venomous but it is not a threat to human beings. It can bite and hold on tightly. An amazing fact is that when the Banded Gila monster lizard bites it releases the venomous that is chewed by its larger teeth through capillary action thus releasing just a little of venomous which is not poisonous. But in most cases it gets killed by humans for fear.

It spends most of the time hiding below the ground. It is able to withstand the harsh environment because of the special features it possesses. Being a large lizard it can store energy where the fat is stored in the tail and the body.

Three months in the spring, its above ground activities are seen. This is the time when mating takes place and food too is plenty. Mainly the activities are done in the morning. Banded Gila monster lizard is a solitary animal but when the mating starts, you can spot it in the communal areas.

The mating starts in late April to early June. The female Banded Gila monster lizard lays two to twelve eggs that stays below the ground and hatches in the next spring ten months later. The hatch-lings measures around 6 inches (15 cm) long.

Search the Web for More information on Banded Gila Monster at LookSeek.com Search