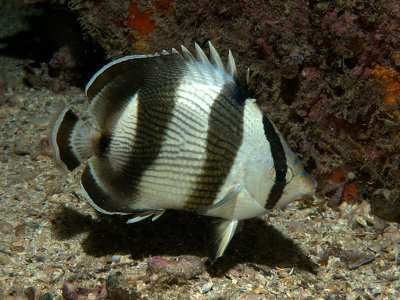 Banded Butterflyfish (Chaetodonstriatus) is known as butterflyfish, butterbuns, banded school mistresses, mariposas or the Portuguese butterflies. The fish is commonly found to inhabit the tropical marine reefs between 43 N to 23 S and at maximum depths of fifty five meters. It can also be found in the Gulf of Mexico and the Western Atlantic primarily in Massachusetts to Rio de Janeiro, Brazil. The fish is a well-known denizen of commercial aquariums.

The Banded Butterflyfish is particularly a beautiful fish. It has a thin disc-shaped body with a concave forehead and a short snout. The fish has thick vertical stripes with two on its side and the third bar extending from its dorsal fin to the tail. The pigmentation of juveniles and adults is very different. A juvenile fish has huge-ringed black spot at the base of the dorsal fin. It also has four vertical body bars and a general body color of brownish-yellow as an alternative to the white color which the adults have at the base.

The Banded Butterflyfish is a carnivore thus feeding on mostly reef inhabitants that include anemones, tube corals, worms and crustaceans. When feeding the fish, it is important to provide supplements in their diets including meaty preparations and vitamin enhanced foods. Precautions are necessary when housing the fish in a reef tank as the it can devour almost every invertebrate in the aquarium. The Banded Butterflyfish is most active during the day seeking shelter in the evening. This behavior is dictated by their vulnerability to larger predators.

Search the Web for More information on Banded Butterflyfish (Chaetodonstriatus) at LookSeek.com Search