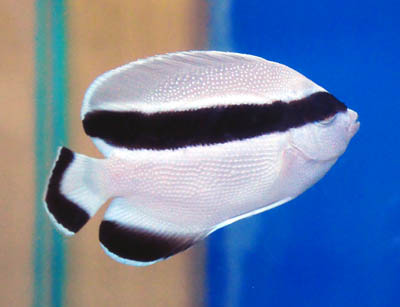 An individual Banded Angelfish thrives in a tank aquarium of at least a hundred and eighty gallons (681 liters) of water and since it is a shy fish, requires plenty of hiding places. Once the Banded Angelfish establishes itself in a tank aquarium, it may become territorial and aggressive to other fish later introduced into the aquarium. The Banded Angelfish prefers mainly a marine setting and is not a food reef dweller as it has a habit of nipping on clam mantles, soft and hard corals. Banded Angelfish species are hermaphroditic and therefore very difficult to breed in any tank aquariums since the male and the female are indistinguishable by coloration.

The fact is that a Banded Angelfish are omnivorous, (definition-they eat both other animals and plants). The feeding habit of the Banded Angelfish makes the fish very difficult to acclimate in a tank aquarium since it mainly involves the natural diet. However, the Banded Angelfish does well with a diet that contains live rock for grazing, marine algae. When you first get your Banded Angelfish, it may need to be given live foods such as freshly chopped seafoods or vitamin fortified shrimp or to encourage them to eat.
In the wild Banded Angelfish like hiding in areas near caves where there is soft and stony corals. That's were the Banded Angelfish feed on tunicates, sponges benthic algae and weeds.
Ideal water temperature for your fish is between 72 to 78º F (22 to 25.5º Cel) and pH from 8.1 to 8.4. The specific gravity at 1.020 to 1.025.

Test the water when preparing your tank for your Banded Angelfish: You will need to purchase a liquid tester so that you can test for Nitrates and Ammonia. The strip-style test kits are unreliable and a waste of money. You should use a dechlorinating product to remove the harmful chlorine from the water. Test for nitrite, ammonia, and proper PH. The ammonia should always be 0, the nitrite should be 0, and the nitrate should preferably be below 20 ppm. If it's at or above 40 parts per million (ppm), you have too many fish or are not changing the water often enough. Cycling your tank is important, Follow the steps to cycle your tank. This establishes healthy bacterial and chemical levels.

Search the Web for More information on Banded Angelfish at LookSeek.com Search