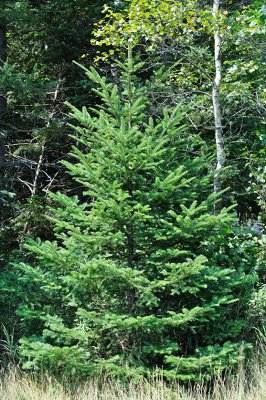 The Balsam fir is also known as Abies balsamea. It has been given this name because of the several resinous fibers that are on its bark. It is a medium sized tree which can grow to a height of about forty to fifty feet with a spread of one to one and a half feet. The tree has been known to have several similar characteristics with the Fraser Fir tree although their geographical ranges do not overlap. Moreover, the Balsam Fir exhibits a relatively dark green denser pyramidal crown with a slender tip that resembles a spire.

The tree has numerous foliage which are needle-like shaped. The leaves have a dark-green color above with a much lighter green color below. Individual needles are flat, notched at the tips and have round circular bases. These needles generally occur on the lower branches of the tree as two rows along sides of each branch, spreading three quarters to one and a half inches long. However, they are usually not crowded. On the older branches, they usually tend to be shorter and curved upwards in order to cover the upper sides of the branches.

The Balsam Fir has both male and female flowers which are located on the same tree. Both flowers are receptive around late May to early June after which they give way to short bract cones. Matured cones usually measure two to three and a half inches long and are considered to mature in a single season. Upon ripening, the cones fall apart leaving an upright central core. This usually happens in the months of September to November. It has a thin, ash-grey bark with numerous blisters. These blisters contain fragrant, sticky liquid resin. On maturity, its bark can grow up to a half n inch, broken into thin scales and red-brown in color.

The Balsam Fir tree can do well in moist to well-drained sandy-loam acidic soils with cooler climates or a humid atmosphere. It is considered to be tolerant to cold conditions. It is believed to live for one hundred and fifty to two hundred years long.

The Balsam Fir tree is also know for being used as a Christmas tree. In addition, it has used for pulpwood, crates, and light frame construction. Its resins have been the source of the Canadian Balsam which has been used in making of microscope slides.