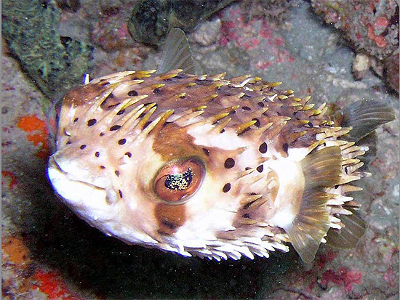 The Balloonfish is also referred to as the Spiny porcupinefish or the Spiny puffer. The fish belongs to the family of fish species known as the Diodontidae. It inhabits the tropical waters and some subtropical and temperate regions which include the West and East coast of Africa, through the Indo-Pacific region, Equatorial Islands, Japan, Hawaiian, Australia, and Southern California, Easter Islands, Gulf of California, to the Galapagos Islands and Colombia. Brazil to Canada including the Gulf of Mexico, Florida, Caribbean Sea and the east coast of Mexico.


The Balloonfish has the ability to inflate its body by taking air or water into portions of its digestive tract. The process helps the fish to raise its diameter size three times larger than its normal size. The fish’s spines are evident to come from their flat positions to an erect position. The flattening of the fish’s spines increases the size of the fish in addition to creating a protective mechanism from its predators


The fish ranges in length from eight to four inches long. However, it can grow up to a maximum length of twenty inches. Its body is round-shaped and robust with the head and the body having the same diameter. The caudal fin is smaller and at the back of the body is a tail. The face of the fish is flat although the lips are protrusive and are supported by fused, large front teeth which form a beak-like structure that is considerably heavy. The eyes of the fish are all set at the forehead of the fish and are large. The fish’s background color varies from light brown to tan with scatters of dark brown spots and intercepting spots of black.


The adult juveniles prefer rocky reefs, coral and mangrove areas or grassy flats, sandy and muddy regions. The fish maintains an open-water to near surface water in aquarium habitats. The Balloonfish is nocturnal, mostly feeding at night. Some of the foods eaten by the fish include mollusks, gastropods, and crabs.