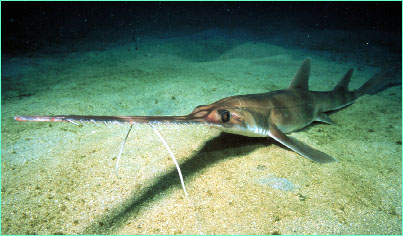 The Bahamas Saw-shark has a distinctive snout that is long, flat and tapering. The Bahamas Sawshark have whisker-looking barbells that are fleshy and are thought to aid the sawshark in feeding. Bahamas Sawsharks are known to have several serrated teeth on either side of their snout hence their name. The adults will grow to at least 31 inches (78.74 cm) long.

This is a tropical Sawshark that prefers the deep waters.

It has 13 to 14 teeth on both side of its snout in front of its barbells, and another 9 to 10 teeth each side but behind the barbells. This means it can have a total of 48 teeth giving its snout the recognizable saw-like appearance.

Habitat and Range of Bahamas Sawsharks

This species of Sawshark is narrowly distributed within Western Central Atlantic, which is between Cuba Florida and the Bahamas. This cold blooded fish prefers to stay at the bottom of the ocean, between depths of 1330 to 3330 ft.

Generally nothing is known about the diet of Bahamas Sawshark. Based on other Sawsharks feeding ecology; the Bahamas Sawshark species like eating small fish including invertebrates that live in the bottom of the ocean. Thanks to their tapered snout and sensitive barbells that are adapted to help the animals find prey that is buried in the mud or sand on the sea floor.

Bahamas Sawsharks are ovoviviparous which means that the young one is sustained in the womb with a placental yolk sac, and the pups measure about 11 7/8 long at birth.

Form human perspective they are considered harmless, though they will feed on tiny fish and shrimps.

Search the Web for More information on Bahamas Saw-Shark at LookSeek.com Search