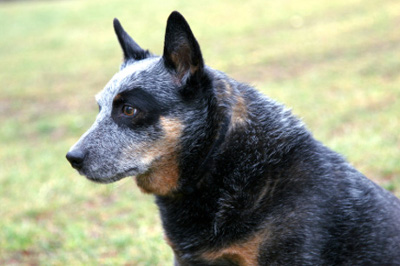 Facts about Australian Cattle Dog, "Scientific name for Australian Cattle Dog, or domestic canine, is Canis lupus familiaris". In the 1800s the Australians, began crossing Dingo-blue merle Collies to Black and Tan Kelpies and Dalmatians. The dog that was breed was a dog identical in build and type of the Dingo, but only had a thicker set markings, and also a fantastic herder and worker. Originally Known as the Australian Heeler, Hall's Heeler, or Queensland Heeler and the Blue. This dog is not only tough, but also smart and loyal.

The Australian Cattle Dog has a black nose and dark brown, medium-sized eyes that's shape is oval. The teeth should meet in a scissor-bite. The Australian Cattle Dog's colors are red speckle, Blue-mottled, blue speckled and includes blue, black, or tan markings on the head and usually tan on the chest, forelegs, throat and tan on the hind legs and jaw. The undercoat can be tan with a blue outer coat. Red speckle means that it is red all over, including its undercoat and this means it usually has dark red markings on the head.
The Australian Cattle Dog likes to be involved in all family activities. They are good at canine sports such as test of agility, obedience, fly ball and flying disc catching etc.

Nipping and biting being the natural instinct of the Australian Cattle Dog, proper training holds a major place in its habitual life. Training along with socialization in controlled environment and supervision can only minimize this potentially dangerous attitude.

Devoted to its owner, the Australian Cattle Dog is called as a “shadow” dog. It is very hard to separate it from its master. There is only one way in which this dog can be made to get along with children, they need to be raised along with the baby and other pets.

An Dog sees in color and have better low light vision. Australian Cattle Dogs have three eyelids, a lower lid, an upper eyelid lid and a third lid, that is called a haw or nictitating membrane, this keeps the dogs eye protected and moist. Dogs eyes have a special membrane for seeing better at night, called a tapetum lucidum - a dogs reflective layer in the choroid chiefly of nocturnal, causing the eyes to glow when light at night hits the eyes and they consist of some layers of smooth flat cells covered by a section of double deformed crystals

Search the Web for More information on Australian Cattle Dog at LookSeek.com Search