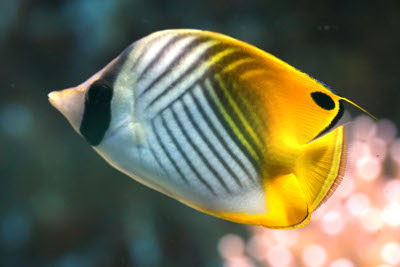 Origin of the Auriga Butterflyfish

It has mainly been seen in the Red Sea, coasts of Indo-Pacific, Lord Howe Island and along the East African coast. Its distribution also extends from the Hawaii southward to Australia and central Polynesia.

Feature of the Auriga Butterflyfish

The Auriga Butterflyfish exhibits color markings that do vary depending on the region of origin. Those that originate from the Red Sea tend to lack the eyespot on the dorsal fin. The eyespot is a false eye that’s used by the fish to confuse predators. The fish is a shy, but very hardy species. The average size full grown is 8 inches (20 cm).

About the Auriga Butterflyfish

As it is the case with all the Chaetodontidae species, the Auriga Butterflyfish has the same stereotypic behavioral characteristics, but only differs on its hardiness, a feature that makes it to be recommended to both inexperienced and pro aquarists. It swims boldly about the tank, regularly pausing to inspect the food around the aquascape. A pair of male and female Auriga are always spotted swimming in close proximity to one another and do occasionally perform “greeting display” when they reunite together after some time of foraging apart.

Diet of the Auriga Butterflyfish

The fish primarily feed on plankton frozen, freeze-dried and fresh or flake foods. It also recommended that regular supply of vegetable and vitamin-boosting supplements be maintained in a regular basis. Normally, it is sometimes hard to make the fish eat tank-fed foods, so observing it eat first before buying it is recommended. Mysis shrimp is also a good food for the Auriga Butterflyfish.

Aquarium of the Auriga Butterflyfish

When bred in an aquarium, it ought to be provided with adequate swimming and hiding places to enable it settle calmly in a non-aggressive tank. The Auriga Butterflyfish is a very good community fish, though at times it exhibit hostility towards other butterflyfish with similar color outlines, including members of its own kind, but tends to ignore unrelated species. The minimum size of the tank for the Auriga Butterflyfish is 125 gallons (475 liters) and the care level for this fish is easy. The water temperature is 72 to 78° F (22 to 25 cel), dKH 8 to 12, sg 1.021 to 1.023

Test the water when preparing your tank for your fish: You will need to purchase a liquid tester so that you can test for Nitrates and Ammonia. The strip-style test kits are unreliable and a waste of money. You should use a dechlorinating product to remove the harmful chlorine from the water. Test for nitrite, ammonia, and proper pH 8.2 to 8.4. The ammonia should always be 0, the nitrite should be 0, and the nitrate should preferably be below 20 ppm. If it's at or above 40 parts per million (ppm), you have too many fish or are not changing the water often enough. Cycling your tank is important, Follow the steps to cycle your tank. This establishes healthy bacterial and chemical levels.
Remove 30% of the water from your fish tank each month with new water, or a 15% water change every 2 weeks is ideal for keeping nitrates lower. With corals in the fish tank, then 20% water change every month, or 10% change every 2 weeks.

Search the Web for More information on Auriga Butterflyfish at LookSeek.com Search