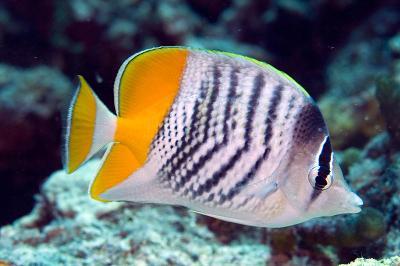 Features of the Atoll Butterflyfish

The fish has a striking eye-catching body color pattern comprising of white color with five to six chevron-shaped dark grey bands on either side. The posterior portion of its trunk and caudal fin, adjacent anal and dorsal fins are either yellow or orange in color. The fish’s body also features a black bar running, without break, across its eye over to the nape. It is this striking appearance that makes it a very good aquarium fish.
Atoll Butterflyfish are often seen singly or in pairs within seaward reefs and deep lagoons at 33 to 395 feet (10 to 120 meters) below the water surface. It is also known as Yellowback Butterflyfish, Keel-finned Butterflyfish, and Orangebar Butterflyfish.

Aquarium of the Atoll Butterflyfish

The Attoll Butterflyfish is known as a hardy fish making it a good fish for inexperienced and experienced aquarists alike. It, however, requires a doo-sized, well-established aquarium probably a 60 gallon tank for a single fish. The average temperature for your aquarium is 74.0 to 82.0 F° (23.3 to 27.8 C°) Specific gravity is 1.020-1.025 SG. If you want to keep more than one butterflyfish then a larger tank will be necessary. The tanks ought to be decorated with rocks so as to give the fish more hiding places alongside plenty space for swimming. It is a free-swimming species which spends most of its time moving in and out of crevices in open waters. The Atoll butterflyfish is generally a peaceful and a good community fish and doesn’t often show any aggressive behavior towards other tank mates.

Aquarium care of the Atoll Butterflyfish

Test the water when preparing your tank for your Atoll Butterflyfish: You will need to purchase a liquid tester so that you can test for Nitrates and Ammonia. The strip-style test kits are unreliable and a waste of money. You should use a dechlorinating product to remove the harmful chlorine from the water. Test for nitrite, ammonia, and proper pH 8.2 to 8.4. The ammonia should always be 0, the nitrite should be 0, and the nitrate should preferably be below 20 ppm. If it's at or above 40 parts per million (ppm), you have too many fish or are not changing the water often enough. Cycling your tank is important, Follow the steps to cycle your tank. This establishes healthy bacterial and chemical levels.
Remove 30% of the water from your Atoll Butterflyfish tank each month with new water, or a 15% water change every 2 weeks is ideal for keeping nitrates lower. With corals in the fish tank, then 20% water change every month, or 10% change every 2 weeks.

Diet of the Atoll Butterflyfish

The Atoll Butterflyfish are omnivore, (definition-they eat both other animals and plants) and mainly feeds on algae and small benthic invertebrates. In the wild, they also feed on soft corals and stony coral polyps. When being bred in the aquarium they need to be fed regularly on a variety of live, dried or frozen food, including the prepared formula ones, with more emphasis being placed on spirulina and vegetables.

Search the Web for More information on Atoll Butterflyfish at LookSeek.com Search