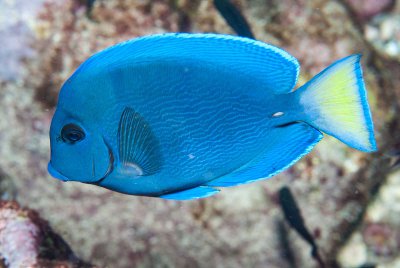 The Atlantic Blue Tang fish is astonishing and eye-catchy, it is therefore great for aquariums throughout all its life stages. The juveniles come in beautiful bright yellow with blue coloured edge fins. However, the Atlantic Blue Tang fish loses their coloration when they are about 6 to 7 inches (15 to 18 cm)depending on the individual fish and can reach 9 inches (23 cm).

The fish can be kept either in pairs or in small groups since it experiences a peaceful disposition and prefer being solitary. The aquarium requirements depend on the size of the Atlantic Blue Tang fish. The fish species is usually available in relatively smaller sizes, about two inches (5 cm). However, the Atlantic Blue Tang fish surprisingly grows quite large. This means that the adult Tang requires a 180 gallons (681 liters) tank. However, the smaller juveniles can be kept in a fifty gallon (190 liters) tank aquarium although they require enough food in order to keep them busy. The fish species do not easily adjust to captivity hence keeping them in tanks can be quite a challenge.
The Atlantic Blue Tang fish is usually peaceful and can co-exist with other fish of similar kind. In addition, the fish is robust enough to defend itself from predators such as the large Angelfish species. The minimum tank size for the Atlantic Blue Tang fish full grown is 180 gallons (681 liters). The average range of water temperature is 72 to 78° F, dKH 8-12, sg 1.020-1.025

Test the water when preparing your tank for your Atlantic Blue Tang fish: You will need to purchase a liquid tester so that you can test for Nitrates and Ammonia. The strip-style test kits are unreliable and a waste of money. You should use a dechlorinating product to remove the harmful chlorine from the water. Test for nitrite, ammonia, and proper pH 8.2 to 8.4. The ammonia should always be 0, the nitrite should be 0, and the nitrate should preferably be below 20 ppm. If it's at or above 40 parts per million (ppm), you have too many fish or are not changing the water often enough. Cycling your tank is important, Follow the steps to cycle your tank. This establishes healthy bacterial and chemical levels.
Remove 30% of the water from your Atlantic Blue Tang fish tank each month with new water, or a 15% water change every 2 weeks is ideal for keeping nitrates lower. With corals in the fish tank, then 20% water change every month, or 10% change every 2 weeks.