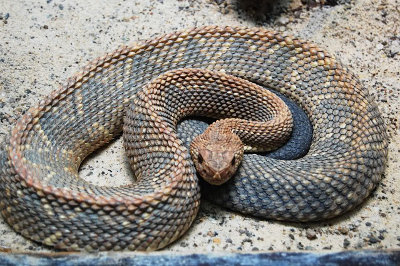 Facts about Aruba Island Rattlesnake. "Scientific name for Aruba Island Rattlesnake the Crotalus unicolor. The word Crotalus is derived from the Latin word crotalum meaning "rattle". The word unicolor is derived from two Latin words: uni (meaning “one”) and color referring to the snake’s faded color pattern that produces a more or less uniformly washed out light coloration.

It has short, stocky looking body, scaly skin and a V-shaped head indicating that it belongs to the vipers family. It’s name is derived from the rattling noise of its tail. Its scaly body has distinctive blue, brown and pink diamond-shaped markings that start just behind the head and run along the body to the tail. The Aruba Island Rattlesnake has stripped heads and necks. Some also tend to be pale gray to peach in color. Just as it is with other vipers, this species has a lethal long and hollow fangs that usually fold up against the upper part of its mouth when not being used.

Males are slightly larger than the females, but both appear similar in pattern. An adult Aruba Island Rattlesnake grows up to 3 feet (90 cm) in length and weighs 20 to 25 ounces (.56 to .70 kg). The snake’s color often gives it indistinguishable from the ground color making it very hard to spot in the wild.

The wild Aruba Island Rattlesnake is generally a carnivore that mainly feeds on whiptail lizards, small rodents and birds. It uses its venom to kill its prey before swallowing them wholly. Hunting is mainly done from late afternoon to early morning.

Mating season often occurs between September and January when the courting males start to spend good time with single females. Fertilization is internal, and after four to five months of gestation, the Aruba Island Rattlesnake produce between five to 15 live young. The offspring normally start to hunt immediately after their first meal since they are usually born with fully functional fangs. Male Aruba Island Rattlesnake reach maturity in approximately four years while females do in five years.

The Aruba Island Rattlesnakes venom is recognized as one of the highly toxic and deadliest of all rattlesnakes. Their bites, although seldom encountered, are considered life-threatening for human.

The Aruba Island Rattlesnake has no known natural predators in its limited native habitat. Nonetheless, human encroachment is currently proving to be the worst threat to this snake species. They have been massively eliminated through from their natural habitat in the northern half Island. Besides habitat destruction, wanton destruction and illegal collection of the Aruba Island Rattlesnake for pet trade are also mentioned to be negatively stressing their already reduced population.

Lifestyle of Aruba Island Rattlesnake
The Aruba Island rattlesnake is a rather solitary and is rarely seen to live, hunt or even come into contact with members of the same species. The male adults are commonly seen competing for females during breeding. The young ones become independent right after birth, meaning no parental care is provided.

Search the Web for More information on Aruba Island Rattlesnake at LookSeek.com Search