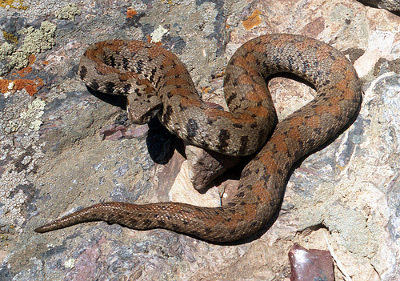 All Armenian Viper snakes doesn’t look alike as they may be featured by gray-brown, gray or black colors. Their backs are often covered with smooth, round, circular blotches which can be yellow-orange, yellow or redand their egdes have black coloration. With the exception of the exclusive large scales located above the eyes, its head is marked by rather small scales. Also its head possesses two teardrop-shaped black spots in the back. The Armenian Viper are moderate growing snakes, and the male Armenian Viper can reach a maturity height of 39 inches (99 cm) while females can reach 31 inches (78 cm).

In 1980s, there were enormous reports of the reduction of the Armenian Viper snake species. Throughout Armenia, the habitat of this viper has been modified because of the growing agricultural industry. This medium-sized snake is not an endangered species but its reduction since 1960s has raised various conservation concerns.

Also, most of the Armenian Viper snakes have been collected to be used as pets. In 1960s, there were about 20 to 50 specimens per hectare while the current stats show that there are only 3 to 9 specimens per hectare. Due to this reduction, the Armenian law protects them from illegal collection. In fact, the Shikahogh Reserve and Khosrov Forest Reserve have been set specifically to conserve this species.

The Armenian Viper can be found in northwestern Iran, Iraq, Azerbaijan, Armenia and eastern Turkey. Generally, this Armenian viper is endemic to the Armenian Highlands straddling from Turkey through Armenia to Iran. The Armenian Viper snakes live in dry forested parts in mountains, mountainous steppes, Juniper forests, on 4265 to 5905 feet (1300-1800m) altitude, on slopes full of rocks with scarce flora and sometimes on altitudes reaching 8858 feet (2700 meter) above the sea level. They may also dwell in valleys where they hide in stone heaps.

The Armenian Viper snake is an ovoviviparous species as they produce eggs and hatches them within the body to allow the young are born alive. However, the young are born without a placental attachment as in fishes and reptiles. After a gestation period of about 150 days, the females conceive between 3 to 18 young vipers. Normally, the hatchlings are born between August and September.

The Armenian Viper snake feed on small rodents, insects and birds. By flicking their tongues, they are able to detect food by utilizing their highly sensitive receptor system. The minuscule chemicals found in the air are perceived as scent. These receptors allow them to identify mates and even predators.

Search the Web for More information on Armenian Viper Snake at LookSeek.com Search