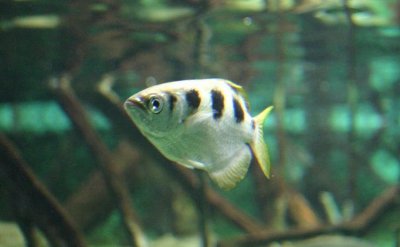 Facts about Archerfish. "Scientific name for Archerfish is "Toxotes Jaculator". (Toxotes means bowman or archer), the name is for a family of tropical fish native to the waters of northern Australia and southeastern Asia, India, the Western Pacific. Archerfish are found generally near the coast in salt water, as well fresh water and brackish. Archerfish come in four species, all similar looking in appearance. Archerfish are silver-gray with black vertical bands. Adults usually they are under 6 1/2 inches (17 cm), they can reach a maximum length of 16 inches (40 cm). The Archerfish is known for the amazing ability to shoot down insects above the water surface. Their flattened body gives them a narrow profile from above the water, so they can sneak up on their prey. Some squirt several drops of water little by little, others can shoot just one shot. Archerfish squirt water at insects from their mouths to knock them down, the snout is pointed out of the water and the rest of their body remaining under the water. An Archerfish, by squeezing its gill covers and pushes water forward along the top roof of its mouth with their tongue, will shoot water and the tip of the tongue directs the aim. The stream of water can fly more than 3 feet {1 meter} in the air. Young Archerfish will start learning to shoot when they are about 1 inch long, their shots can reach to about 4 to 8 inches (10 to 20 cm). The Archerfish would rather jump out of the water to catch its prey than "shoot" it down. When the insect becomes to close to the top of the water the Archerfish will leap out of the water and catch the insect in its mouth. When this fails, it will most likely resort to shooting the insect. Archerfish when feeding swim in "shooting parties" as they are called. When they see the insect they will all shoot steadily at the same insect, when it goes down the whole school of Archerfish rushes towards it to get there first for there lunch. Their large eyes are located near the mouth giving off telescopic like vision which helps considerable in their accuracy of their aim. Only the juveniles Archerfish are known to be found in brackish water. The adults swim out to the coral reefs to breed and they will lay 15,000-120,000 eggs after breeding. Most that hatch will not make to adulthood. Young Archerfish have coloration of yellow patches on their upper body between the dark bands, that will help them school together in the muddy waters. As the Archerfish get older, the patches will disappear and the black bands get shorter and in time will only be seen on the uppermost part of their body.

Search the Web for More information on Archerfish at LookSeek.com Search