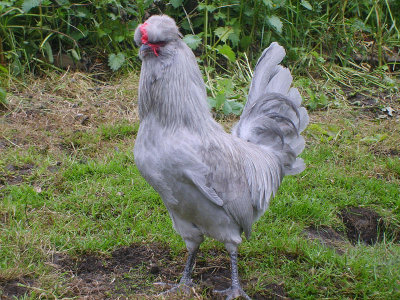 Originally the Araucana chicken had large floppy pea combs, however the ones available have been bred to contain very small yet irregular shaped pea comb. Unlike other common breeds the Araucana chicken do not have wattles and their facial feathers are somehow thick and with a small crest on top of its head. The Araucana chicken breed has a probability to be born either with or without a tail. The type that are born without the tails are known as Rumpless Arauncanas; generally they are short and rounded birds that have an upright stance also with a broad skull. The Rumpless Arauncanas have unusual wart-like feature that is placed on either side of the head and it is referred to as plicae, they have feathers placed on the which makes the ear tufts that slant backwards.

The Araucana chicks are quite strong; they grow very fast, and also mature very quickly. The breed’s hens tend towards broodiness and they also make excellent mothers. The Araucana chicken will not mind being kept in a pen, but they do prefer fresh grass so you will need to move the coop on a regular basis to support its need for fresh grass. The Araucana chicken breed is mostly famous for laying eggs that are blue in color. Though this can make them be confused with the Easter Eggers which normally lay green and blue eggs and they don’t conform to any standard of breed.

The unique eggs are not nutritious as compared to the other colors, and neither do they have any negative effects to one’s health.

Search the Web for More information on Araucana Chicken at LookSeek.com Search