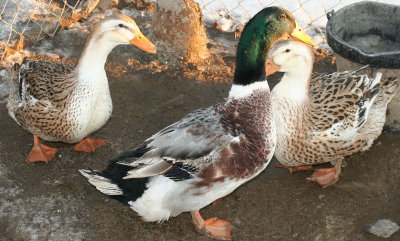 The Silver Appleyard Ducks shoulders are white in color looking as if they have a lace. The underside is either cream or silver. The wings have a white and gray color with a bright blue stripe. The tail’s feathers have a dark bronze color.

When choosing Silver Appleyard Ducks for breeding it is good to pick the active, robust and the strong legged one for their amazing history of production of eggs. This is because most of Silver Appleyard Ducks are undersized. But the ones which are well muscled are very good for breeding.The excessively large ones are not recommended because they have problems when it comes to mating and laying eggs.

Appleyard Ducks are also called "waterfowls" they are generally found in places were there is water, such as ponds, rivers, streams, lakes and occasionally your back yard pool. The definition of Anatidaephobia is irrational fear that you are being watched by a duck.

The Silver Appleyard Duck is a Precocial (meaning) Born or hatched with the eyes open, a covering of hair or down, capable of a high degree of independent activity from birth and able to leave the nest just a few hours after hatching.

In the wild the male Duck will guard their nest by chasing away other ducks. Once the female duck lays 5 to 8 eggs, she will start to sit on her eggs to keep them warm so that they can hatch into baby ducklings. The eggs will hatch on average within 26 to 28 days. Baby ducklings are able to fly within 5 to 8 weeks.

Underneath the water-proof coat are downy soft fluffy feathers which keep the Silver Appleyard Ducks body warm. Ducks keep clean by being able to turn their heads completely backwards, and put their beaks into their feathers by preening themselves.

A "bill" is what is call a Silver Appleyard Ducks mouth. There are no teeth in the ducks bill, they have rows of thin bristles, which helps them to filter pieces of nutrition out of the water. Silver Appleyard Ducks swallow there food whole and it goes to an organ called a gizzard, were the food is first ground up and than moves on to the stomach. The different bill shapes and sizes for finding food, has over time mutated to fit each environment. The Silver Appleyard Ducks bill is flat and broad and has rows of fine incision along the outer edge called "lamellae". meaning a thin membrane, plate, scale or layer, as of cell wall or bone tissue. The larnellae helps the Silver Appleyard Duck to clutch food for feeding.

Search the Web for More information on Silver Appleyard Duck at LookSeek.com Search