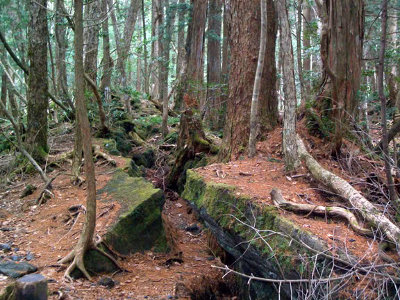 The Aokigahara Forest (also known as The Sea of Trees or The Suicide Forest) is the most popular site for suicides in Japan, and only second in the world to the Golden Gate Bridge. The forest lies foot of Mt. Fuji, and is approximately 15 square miles in size. The very dense forest consists mainly of volcanic soil with many deposits of magnetic iron, it also contains an Ice Cave and a Wind Cave, which makes it very popular with tourists. Due to the density of the forest there is an absence of wildlife in the area, which makes it even more eerie, quiet and as legend says very haunted.

The novel Kuroi Jukai ( The Black Sea of Trees) was released in 1960 and tells the story of a woman who has a love affair with a young public prosecutor. The woman’s husband blackmails him, and the only escape for the lovers is a double suicide inside the dark and mysterious Aokigahara forest.

After the novel was released, people began to take their own lives there at a rate of 50 to 100 deaths a year, while it is stated that suicides do predate the novels release.

This area is famous for two things, the breathtaking views of Mt. Fuji and the suicides. Many people say that this place is also haunted and it is the ghosts the help the people commit suicide.

Signs throughout the forest, written in Japanese and English, state "Your life is a precious gift from your parents," and "Please consult the police before you decide to die!"

Authorities sweep for bodies only on a semi-annual basis because it too dense to patrol more frequently. During these semi-regular body search, they leave plastic tape to mark where a body is found, and this tape is never removed. So after the first mile or so from the forests' entrance the area is littered with plastic tape.

Legend states that leaving the corpse is very very bad luck, and that the yurei (ghost) of the suicide victim will scream throughout the night, and it is also said that witnesses have seen the bodies move on their own.

Search the Web for More information on Aokigahara Forest (The Suicide Forest) - Japan at LookSeek.com Search