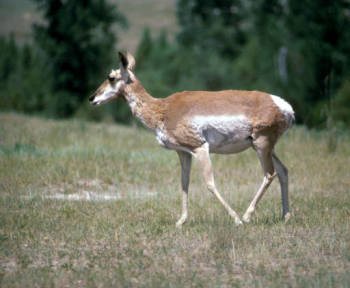 The entire group of Antelopes appeared around 55 million years ago, during the Eocene era. The Antelope is small herbivores evolved long legs, a fast gait, and horns to protect themselves with. The Antelope have two horns that curve back from the head or stand up from the skull, but their horns may curve, spiral, have ridges, or have corrugated textures. The four horned Antelope has the species name tetracerus quadricornis, essentially four horned Antelope. This is one of the smallest Antelopes at two feet at the shoulder. Other Antelopes can reach four and five feet at the shoulder.

All Antelopes are even-toed. Antelopes are all ungulates, where the weight is carried on the third and fourth toes, whereas animals like horses carry all their weight on the third toe.
Even toed ungulates evolved complex digestive systems that could handle the grasses that spread through the Micoene era 20 million years ago, leading to the group spreading across Eurasia and Africa.
Antelopes typically live in groups, ranging from small to large. A group of Antelopes, no matter the species, is called a herd.

Most antelopes live in Africa. The Arabian Oryx and Dorcas gazelle live in the Arabian Peninsula. There is a Tibetan Antelope and several Antelopes native to India. The saiga Antelope lives in central Asia and Russia.
A few species of Antelope live in the forests, but those tend to be smaller than their brethren living in the Savannah. Those living in the African Savannahs migrate along with the seasonal rains.
There were Saiga Antelopes that lived in North America, but they along with the mastodons, armadillos, and giant sloths the size of small cars, short faced bears much larger than grizzly bears and others were hunted to extinction after the arrival of humans. The pronghorn survives in North America and is sometimes called an Antelope but falls into a different genera. There are wild Antelope in the U.S. now, but those are descendants of ones that escaped from Texas game ranches where they were raised to be shot by hungers.
Antelopes that live on the plains eat grass. Antelopes that live in the forest like the royal Antelope eat soft leaves, fruits, and fungi. The gerenuk can stand upright on its hind legs to get leaves in trees, though it does not have the reach of a giraffe.

Antelopes are part of a wastebasket taxon, a group that includes all even-toed ungulates that are not goats, bison, buffalo, sheep, or cattle. If it is not one of those groups, it gets classified as an antelope.
The grey rhebok is sometimes called an Antelope, though it does not fall in that taxon.

Search the Web for More information on Antelope at LookSeek.com Search