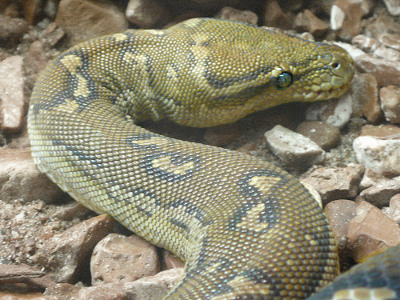 When it comes to range and habitat, the Angolan Dwarf Python is native to Africa, Northern Namibia and Southern Angola. Habitat consists of ravine bush, areas strewn with rocks in open grasslands or bushes and rocky outcroppings.

Small and young Angolan Dwarf Pythons are preyed on by predators such as birds of prey, some reptiles and other mammals such as mongoose. Human activities can really affect the habitat of these snakes in the wild.

The Angolan Dwarf Python snakes have heat sensitive pits located on the upper lip and five on each side of the head. They have Angolan Jacobsan’s organ lined along its mouth with olfactory cells and nerves that normally interpret the chemical stimuli in its environment. These organs are a pair of pit like organs on the roof of the mouth. The Angolan Dwarf Python snakes are also characterized by a forked tongue which often flickers through the air. They use this tongue to pick up scent particles before conveying them to the roof of their mouth.