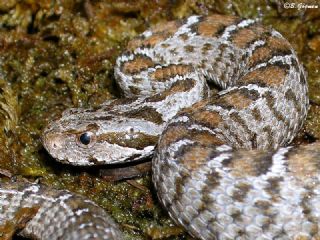 The Anatolian Viper is marked by a black zigzag stripe often beautifying its white or grey dorsally body. There are also some melanistic types of these vipers. Keeled dorsal scales feature them. They are moderate growing vipers in the Turkish forests and the total body length including head and tail ranges from 70 to 95 cm. (27 5/8 to 37 1/2 inches). They may reach a maximum length of 130 cm (51 inches) on good and favorable conditions on particular Greek islands in the Aegean Sea. The Anatolian Viper snake do well in humid areas and they like and grow optimally in well-vegetated areas rocky mountains and forests.

They type of locality these vipers occupy are classified scientifically as Xanthus meaning Southwestern Turkey and some parts of Asia Minor. They are thought to grow well in rainy forests as well as rocky mountains where they can find a place to hide where they prey for small animals.

The Anatolian Viper snake were common in the European Turkey, Patmos, Kalimnos, Kos, Northeastern Greece, Greek Islands of Simi and the Islands of the Turkish mainland shelf. They may also be found in Lesbos, western half of Antolia, Leros and Lispos.

Just like other venomous vipers, the Anatolian Viper preys mostly on rodents and other small mammals and even birds. They prey also on reptiles such as lizards as well. They are good hunters and they feed mostly on small animals.

There is no specific anti-venom, which is recommended by the Viper Antitoxin European, Viper Venom Antitoxin, and World Health Organization listed anywhere. They are venomous vipers and their bites may be very fatal.

Search the Web for More information on Anatolian Viper Snake at LookSeek.com Search