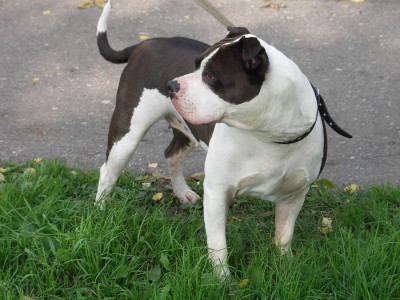 Dogs have two times the amount of ear muscles than people. It is a fact a Dog can hear a sound at four times the distance of a human. Sound frequency is measured in Hertz (Hz) Def-Hertz is the measurement of frequency, explicitly it's one cycle per second. The higher the Hertz are, the higher the pitched the sound is. Dogs hear best at 45,000 Hz to 65,000 Hz, while humans hear best at around 20 Hz to 20,000 Hz.
Average body temperature for a dog is between 101 to 102.5 degrees
Female dogs are in heat for matting for about 20 days twice a year. Female dogs are pregnant for 60 days before they’re puppies are born.
A dog is an omnivore, (definition-they eat both other animals and plants). All Dogs are direct descendants of wolves.

The American Staffordshire Terrier Dog is a happy, outgoing, stable and confident dog breed. It shows gentle and loving attitude towards people. When included in families, they make well behaved, amusing, obedient and loyal family pet. The American Staffordshire Terrier Dogs are easy going with both children and adults. It is an extraordinarily courageous guard dog. Careful breeding has been carried out in the last 50 years to produce this awesome dog.

Friendly and trustworthy are the two perfect words that could describe the American Staffordshire Terrier Dog breed.

The number one heath problems amongst dogs is obesity, so always make sure your dog doesn't get to fat. Many foot problems that dogs have are just an issue of long toenails. Some American Staffordshire Terrier Dog have become prone to heart murmurs, skin allergies, tumors, hereditary cataracts and other congenital diseases.
The American Stafford Terrier Dog can stay in apartments if they are taken to open fields for enough exercise every day or walks a couple of times a day. They prefer warm climate and stay active indoors.

Daily exercise being the basic requirement of the American Staffordshire Terrier Dog, they are difficult to handle without the long walks and jogs. They should be taught to enter and exit the door only after their master does so, which will build a follower instinct in the dog. Otherwise, it may dare to take on its master’s orders in critical situations.

The American Staffordshire Terrier Dog can live for nine to 15 years. The average litter size is between 5 – 10 puppies at a time. Dogs sweat glands are between their paw pads.
It is a Fact a Dog sees in color and have better low light vision. Dogs have three eyelids, a lower lid, an upper eyelid lid and a third lid, that is called a haw or nictitating membrane, this keeps the dogs eye protected and moist. Dogs eyes have a special membrane for seeing better at night, called a tapetum lucidum - a dogs reflective layer in the choroid chiefly of nocturnal, causing the eyes to glow when light at night hits the eyes and they consist of some layers of smooth flat cells covered by a section of double deformed crystals.

A Dog’s mouth can apply approximately 150 to 200 pounds of pressure per square inch and an American Pit Bull Terrier, German Shepherd Dog and a rottweiler can have 320 LBS of pressure on avg.

Only humans and dogs have prostates and a dog doesn't have an appendix.
Dog’s nose prints can be used to identify them, their nose prints are like a humans finger print. It is a Fact a dog smells more than 1,000 times stronger than that of a human. A dog’s nose, secretes a thin layer of mucous that helps it absorb scent, after that they lick their noses and sample the scent through their mouth.
Petey, dog star in the 1920's and 30's in Our Gang, better known latter as The Little Rascals comedy.
Petey or his real name "Pal" was owned by the Lucenay family. When Pal was just a puppy he made a cameo appearance in The Freshman in (1925) a Harold Lloyd film. In 1936 the American Staffordshire Terrier was recognized by the (AKC) American Kennel Club. According to AKC standard it is not recommended for dogs to be more than 80% white.