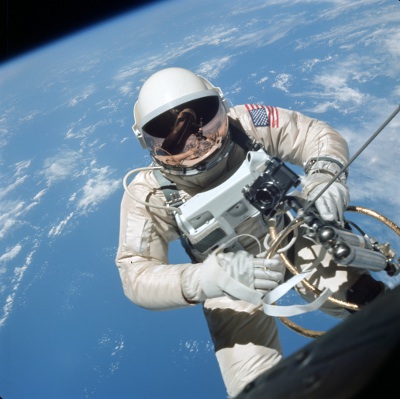 From the first American satellite in orbit, Explorer 1, launched by the United States on January 31, 1958, to the anticipated Space Shuttle Endeavour launching by the U.S. on April 19, 2011, American space exploration has evolved tremendously. It started with rudimentary rocket launches, then sub-orbital and orbital flights to moon landings. Now, we have complex systems that drive and sustain a space station in orbit as a future springboard to the dark reaches of our galaxy and beyond.

American society has changed for the better with the inspiration the U.S. space program provides to its younger generations, by the advancements that have come with space exploration and in the way the United States relates to other nations. A huge lesson I have learned from events of America’s space program is of future hope, especially in the rough times ahead that challenge all the American people.

The history of American space exploration is extensive. The first American scientific exploration from space was a radiation experiment launched on a V2 rocket on May 10, 1946. The first images of Earth taken from space followed the same year. In 1947, the Americans launched the first animal experiment when fruit flies were lifted into space. Notwithstanding America’s movement into the space industry, the success of Sputnik 1, the first orbital launch by the Russians on October 4, 1957, led to the rise of the American space program. On January 31, 1958, the United States successfully orbited Explorer 1 on a Juno rocket.

Since 1962, this country has experienced innumerable events in its history of space exploration. America is continuing this path with its intentions on returning to the Moon by 2018 and to Mars after then.

Our American society is different today because of American (and international) space exploration. This exploration and development, including the construction of the International Space Station (ISS), provides a vehicle for human space exploration, scientific discovery, and assistance in the research for cures of illnesses, new technologies and materials. “The International Space Station is now a stepping stone on the way, rather than being the end of the line,” says NASA Administrator Michael D. Griffin.

Space exploration has affected the American community by providing the people with optimistic views of visiting and populating other planets. Among the possibility of long-duration human space flight and visiting other inhabitable solar systems, the ISS provides a unique opportunity for basic scientific research that simply cannot be done on Earth.

To date “(o)ver 400 experiments have been conducted on the ISS…over 9 years of continuous research. Upon the completion of ISS assembly in 2010, ISS laboratories are expected to accommodate an unprecedented amount of space-based research”.

One lesson learned from space exploration is that the United States and those countries that explore space can cooperate in space discoveries. This is important because, with international cooperation, the nations are able to offer each other various capabilities. This mutual aid also benefits the United States by helping with the cost of space exploration. With
the largest, most advanced space program, the United States has a high potential to benefit all humankind and is considered in a positive light by many nations.

A second lesson is that anyone planning to continue a path into the unknown must think, arrange, prepare and map the course of action and possible outcomes. For NASA and the entire American space exploration project, this includes accepting the risk inherent in spaceflight. The United States has demonstrated that by taking these risks, it is a leader in space exploration and is the partner of choice for international space enterprises bringing many nations together.

The third lesson that I learned is that the American space program must keep the public’s interest in order for long-term exploration to be sustained. NASA has serious budgetary issues, but with the support of the people, the scientific community and programs like the ISS, there is the possibility of my great-grandchildren being on one of those flights.

These lessons are important because they provide hope for the future. This country will need to expand into the outer reaches of our current world due to the population explosion, for research that cannot be conducted on Earth, and especially the dwindling resources of our planet.

As a citizen of America, I can learn and have learned from these lessons. I see how diverse people can cooperate with a common cause, how through adversity, anyone can overcome the most difficult of obstacles and how we can all teach our children to conserve resources until the time that space exploration allows for human colonization.

NASA’s self-described mission statement is “To reach for new heights and reveal the unknown so that what we do and learn will benefit all humankind.” With the support of its people, the American space program has held to this mission statement and will continue to do so for the benefit of all Americans and all people of the world.

Search the Web for More information on American Space Exploration at LookSeek.com Search