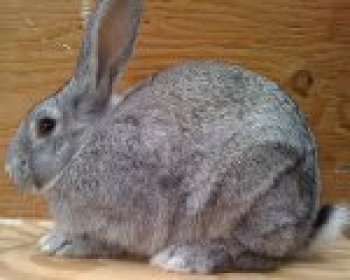 "Scientific name for American Chinchilla Rabbit is Oryctolagus cuniculus". "Fear of Rabbits Leporiphobia". All rabbit breeds are "lagomorphs" various plant-eating mammal of the order Lagomorpha ; a hare, rabbit, or pika.

Low-grade and halfway American Chinchilla Rabbit breeds may be revealed in age categorizations beyond their own if they are obese. Both male and female rabbits less than 9 lbs (2.7 kg) and less than six months of age are considered low-grade rabbits. Male and female rabbits between the age of 6 months and 8 months are considered halfway rabbits. Currently, the American Chinchilla Rabbit breed is considered a critically endangered rabbit, so it is recorded in the livestock conservancy list.

Rabbits have an outstanding sense of vision, smell and hearing. Having eyes on the side of their head and being so big, gives them nearly 360 degrees vision, allowing them to see predators from all directions. They can see everything behind and in front of them and have just a small blind-spot in front of their nose.

Pet rabbits should be kept in pairs for Companionship, its important for a rabbits happiness and it can live longer with a companion. In the wild, rabbits are very social. Female rabbits can produce about 2 to 4 litters of bunnies per year with 4 to 6 babies.

Rabbits love to run and can reach speeds of 30 to 40 mph. The average lifespan of a rabbit is around 5 to 8 years and in captivity can live up to 10 years. Rabbits have 28 teeth and an incredible fact, a rabbit’s teeth never stop growing throughout its life.
Rabbits can jump up to 36 inches (91.4 cm) and sometimes higher.

Rabbits are very clean animals and will groom themselves and also each other. Rabbits are crepuscular-(meaning the are most active at morning and evening) and do most of there feeding in the evening. Rabbits on average sleep about 8 hours.

Rabbits have long ears which can be as long as 4 in" (10.2 cm). Rabbits are herbivores (a herbivore, eats leaves, grass, hay and furns (plant eaters) and also mammal.

Rabbits are born without fur and its eyes are closed and their eyes will open after 7 to 14 days of their birth.. Half of the rabbits in the world live in North America. Rabbits are comfortable living in groups. European rabbits like to live in burrows underground. Warren is known as a group of burrows. Cottontail Rabbits are the only rabbit that does not live under ground.

Rabbits as pets enjoy wet food, pellets, carrots, hay or lettuce, dark leaf lettuce is good. (Iceberg lettuce contains too much water and too little fiber to be suitable.) Limit giving them fruit with sugar in it. Alfalfa provides the high caloric content necessary for baby bunnies development. Once rabbits reach seven months of age, gradually switch them over to timothy hay, oat hay, or orchard grass. Avoid giving them yard clippings, since grass is often sprayed with fertilizer, insecticides, pesticides, and other chemicals rabbits should not be eating. Their diet should consist of 70% of timothy hay and make sure they have fresh water every day.

For bedding, give Rabbits wood pellets or aspen. You can use pelleted horse bedding. Do not give them pine or cedar. Clean the cage with either white vinegar or a cage safe cleaner; don’t use bathroom cleaner or other things that are toxic for the pet cage.
De-worming is a major concern and should be done in the spring and fall. A pea sized amount of de-worming paste in the rabbit's mouth is sufficient for the rabbit.

Search the Web for More information on American Chinchilla Rabbit at LookSeek.com Search