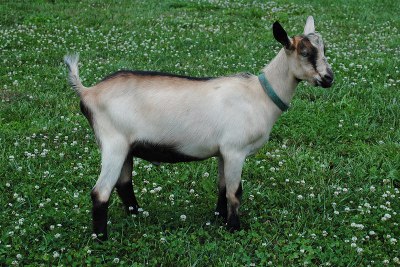 The Alpine Goat appears with a medium to big size body, with white markings on their body and these markings will fade as the goat grows. A matured Alpines Goat attains a maximum height of 30 inches (76.2 kg) and a bodyweight of 125 pounds (56.7 kg). These goat breeds come in a range of colors from gray or white to black and brown. The face of the Alpine Goat breed is straight with its nose similar to most other varieties of European goats.

The Alpine Goat is the only breed with vertical ears that provides all colors and groupings of colors, offering them dissimilarity and individuality. The hair of the Alpine Goat breed is average to short, with the male breeds having an edge of extended hair along the back, and they have a marked beard. The female Alpine Goat breed have big, well-formed udders with well-positioned tit or teat.

The male Alpine Goats have a deeper torso than the female breeds, and there is a steady slope from hips to tail with an extended, even rump and broad, famous pin bones.

There are over 210 breeds of goats in the world. Alpine Goats have no teeth in their upper front jaw. Alpine Goats have 24 molars and 8 incisors. Both sexes, female and male goats can have beards. Male goats reach puberty at the age between 4 to 8 months and the female is between 7 to 10 months. Male Alpine Goats at the beginning of mating season go through a period called a "rut". The "rut" is the beginning of the courting for a doe, a very strong foul musky odor and fighting between bucks begins. Goats can be born without or with horns "polled".

Alpine Goats can turn out to be sexually mature when they attain the age of five months. Female Alpines Goats are pregnant for 145 days to 150 days, in which they give birth to two baby goats.

Alpine Goats are one among the leading milk producers, and their milk is used to make cheese, butter, soap, ice cream.

The average lifespan of the Alpine Goat ranges from 8 years to 12 years.
Mothers will call their young so they stay close at all times, a baby goat is called a "kid". The Mother and kid goat recognize each others calls as soon as the mother gives birth. Baby Alpine Goats are weaned off their moms after around 6 months. Its called "bleating" how goats communicate with each other. A "doe" or "nanny" is what a female Alpine Goat is called. A "buck or "billy" is what they call a male Alpine Goat. A male castrated goat is called a "wether". "Kidding" is the act of a goat giving birth.

Alpine Goats can even climb trees because they have great balance and some goat species can jump over 5 feet high. Capra aegagrus was derived from the Wild Goat (C. aegagrus). In latin "Capra" is the root of the word "capricious" which means whimsical, mischievous, quirky, bizarre and suitable to change fast. A Alpine Goats eyes are rectangular rather than round. At night they have excellent vision and can due just as much at night. A goat herder notice how much energy his goats had, after eating coffee bushes and that's how coffee was first discovered.

Alpine Goats have a four chamber stomach, goats are "Ruminant" is any hoofed even-toed mammal, that digests its food in two stages. First by eating the raw materials and regurgitating a semi-digested form known as "cud" (ruminating: chewing the cud.) then eating the cud. The goat is one of the 12 animals in the Chinese zodiac. "Wattles" is that little tufts of hair that dangles from the goats throat.

Search the Web for More information on Alpine Goat at LookSeek.com Search