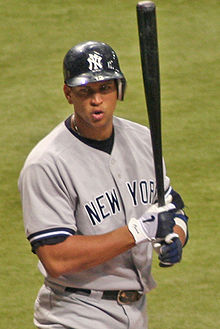 Alexander Emmanuel Rodriguez or better known as Alex Rodriguez, was born in New York City in 1975, Alex Rodriguez made his major league debut with the Seattle Mariners at age 18, playing shortstop. He later played for the Texas Rangers and than traded to the New York Yankees, and in 2007 became the youngest player to hit 500 career home runs. His career took a hit after his 2009 admission that he had used performance-enhancing drugs from 2001 to 2003, but he went on to help the Yankees win the 2009 World Series.
Rodriguez hit in 2005 (.321 batting avg), leading the American League with 124 runs and 48 HR while driving in 130 runs (RBI). Rodriguez became the first Yankee to win the American League home run title since Reggie Jacksons (41 HR) in 1980. He also became one of only two players in Major League history to accumulate at least 35 home runs, 100 runs and 100 RBIs in eight consecutive seasons. Alex plays third baseman for the Major League Baseball New York Yankees. Known mostly by his nickname as (A-Rod), when he was on the Seattle Mariners and the Texas Rangers he played short stop, when comming to the Yankees the short stop position was taken by Derek Jeter, so Alex moved to third base.
Rodriguez is considered one of the best all-around baseball players of all time. He hit 500 home runs, the youngest player ever to breaking the record Jimmie Foxx set in 1939, and the youngest to hit 600 home runs, beating Babe Ruth's record by over a year. Rodriguez has fourteen 100 RBI (runs batted in) seasons in his career, more than any other player in history. Rodriguez hit two home runs in September 24, 2010, passing Sammy Sosa's mark of 609 home runs.
In December 2007, Rodriguez and the Yankees agreed to thr richest contract in baseball history a 10 of $275 million {breaking his last record contract of $252 Million}.
Rodriguez grew up with Joe and Suzy his half siblings, who were born in the Dominican Republic and are children from his mother's first marriage. Victor M. Rodriguez, Rodriguez's half brother, who was born to Alex's father Victor Sr. and his wife Pouppe Martinez in 1960. The couple divorced a year later, and Victor Jr. was raised by his mother. Victor Jr., who is an officer in the United States Air Force, was not in touch with Alex for a 23 year period, until they met at a Texas Rangers game in 2003. In high school, Rodriguez was a talented football player, playing quarterback at Westminster Christian School, a small private school in Miami. On the baseball field, Rodriguez was an even more talened and bigger star. In his junior year, he hit .477 and stole 42 bases in just 35 games while leading the school to the 1992 state championship. By his senior year, Rodriguez had made a decision to concentrate exclusivly on baseball, and scouts flocked the school's ball field to watch the 6-foot 3-inch, 195-pound shortstop play.
Rodriguez had already committed to attend the University of Miami, but when he was selected as the number one major league baseball's 1993 amateur draft by the Seattle Mariners, he went pro with a three year contract paying him, $1.3 million.