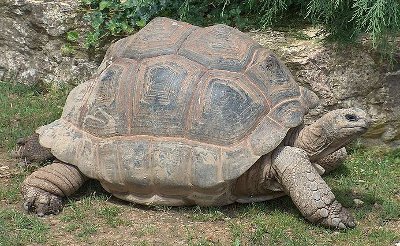 Facts about Aldabra tortoise. "Scientific name for Aldabra tortoise is Aldabrachelys gigantia". region Indian Ocean ( The Island of the Aldabra Atoll in the Seychells, an Island North of Madagascar on the coast of Kenya ). The female Aldabra tortoise often weigh about 350 pounds (159 kg) or more, while the males average around 550 pounds (250 Kg) weight and 47 inches (120 cm) long this makes them one of the largest tortoise in the world. The Aldabra tortoise are usually black and dark gray in color and have a round shell, or carapace. It is estimated that there are about 150,000 Aldabra tortoises living on the Aldabra Atoll, the largest known colony of giant tortoises in the world. It is found on three of the four islands that make up the Aldabra Altoll. The Aldabra tortoise can live more than 100 years with some reports that they can live up to 200 years.
The Aldabra tortoise seem to be very cold tolerant, but they are still going to require supplemental heating to maintain a required temperature of 75 to 100 F (24 to 38 cel). The Aldabra tortoises, while being able to withstand low temperatures, do seem to prefer higher temperatures.
The Aldabra Tortoise when in the wild it's diet consists of mostly weeds and grass with occasional brows mixed in. When in captivity the will eat almost anything. The suggested diet for Aldabra tortoise is a variety of dark leafy greens and grasses and a good mix of vegetables. Do not feed them cabbage because of the propensity to develop thyroid problems among the giant tortoise due to a lack of dietary iodine. Mating takes place between February and may. When a female Aldabra tortoise is ready to lay her eggs, she will dig a nest in the soil and lay between 10-25 eggs. Hatching will take place from early October through mid-December.
In the 1600s, Mauritius was colonized. Settlers from this country often traveled to the Seychelles islands, at the time there where 4 types of giant tortoises who lived there. The settlers often took away or killed the tortoises, which resulted in the extinction of 3 of the 4 species of tortoises. The only remaining tortoise is the Aldabra Tortoise, the other 3 tortoises were existing by 1840s. The Aldabra tortoise was designated as an endangered tortoise in the late 1800s. One of the first animals to be granted, this protection. In 1971 , an international airport was opened on the island of Seychelles and it became a popular tourist attraction. Ninety- five of the tortoises were released on the Curieuse, an island near mahe and it was designated as a National park in 1979 by the. Seychelles government.

Search the Web for More information on Aldabra Tortoise at LookSeek.com Search