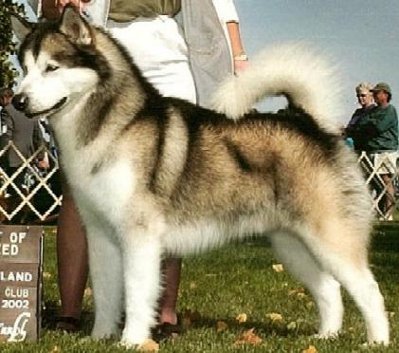 An Alaskan Malamute Dog’s mouth can apply approximately 150 to 200 pounds of pressure per square inch and an American Pit Bull Terrier, German Shepherd Dog and a rottweiler can have 320 LBS of pressure on avg.

The Alaskan Malamute Dogs tail that is held over the back. The head is wide with tall standing ears. The small dark brown eyes, almond in shape are diagonally placed in the skull. The domesticated wolf features. Dark eyes are the Alaskan Malamute Dog breeds color preferred, blue eyes are not the standard for pure breed. The Alaskan Malamute Dog have large padded feet, to use as snowshoes in the region. They have a double coat that averages one to three inches (.39 to 1.18cm) in length, The inner layer is very thick and is a little oily. The outer layer is a medium length and a bit longer over the neck and shoulders. The Alaskan Malamute Dog coat ranges in color of light gray to intermediate shadings to black, sable and shades of sable to red. The coat will always have some white in it. Other colors that can be present in the coat colors will be a very pale grey to a dark black and sable color that blends into a deep red.

Alaskan Malamute Dogs have two times the amount of ear muscles than people. It is a fact a Alaskan Malamute Dog can hear a sound at four times the distance of a human. Sound frequency is measured in Hertz (Hz) Def-Hertz is the measurement of frequency, explicitly it's one cycle per second. The higher the Hertz are, the higher the pitched the sound is. Dogs hear best at 45,000 Hz to 65,000 Hz, while humans hear best at around 20 Hz to 20,000 Hz.

Search the Web for More information on Alaskan Malamute Dog at LookSeek.com Search