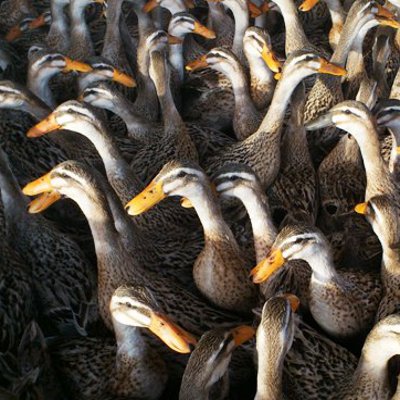 The Indonesian ducks are dominated by brown color, though for Alabio ducks it is not the case. The male and female differs in color, the males have a head which is bright blue or green and the females have a light brown head. Their color is generally brown with white spots and a line pattern around the eyes.

Alabio ducks were raised for laying purposes but lately things have changed since they can be raised as meat producers. The Alabio Duck have a very tasteful meat which is sold across the world. The Alabio Duck lay more than 200 eggs per year, thus being among the best layers in the ducks family.

There have been several cross breeding of the Alabio Ducks which changes it productivity. The cross breeds are more productive though the color of the beak, shank and feathers changes from the original Alabio ducks. The Alabio Duck feathers are cream, while the beak and sharks are either light yellow, dark yellow and orange. This is according to researchers who argue that the colors of the shank, beak and feathers have a variation.

In captivity taking care of Alabio ducks when caged is not a big task. They require good housing with plenty of space to allow them fly around. Clean water is necessary because just as other ducks they love swimming. The Alabio Duck can even use the same water for drinking. Ensure that the water is changed once in a while.

For feeding purposes, the Alabio Ducks eat crustaceans, insects and plants. You can at times set them free if you have a big compound and let them search for their own food. You can also supplement their meal with organic foods. For laying purposes, put wooden boxes maybe at the corner of their house. They are broody so they normally sit on the eggs until they hatch.

Alabio Ducks are related to swans and geese and the duck is the smallest of these birds with shorter wings and neck and a stocky body. Alabio Ducks on average, live 4 to 8 years and can live up to 12 years, depending on the breed. Alabio Ducks are omnivores; meaning - an animal that eats food of both animal and plant and origin.

Scientific name for Alabio Duck "Anas Platyrhynchos" meaning - Wild dabbling duck from which domestic ducks are descended; widely distributed. From New Latin "anas" meaning (Duck) and the word Platyrhynchos comes from "platyrrhine", Ancient Greek meaning (broad snouted, flat-bridged nose).
Alabio Ducks are birds in the Class of "Aves". Ducks of all types are part of the bird family "Anatidae". Alabio Ducks are also called "waterfowls" they are generally found in places were there is water, such as ponds, rivers, streams, lakes and occasionally your back yard pool. The definition of Anatidaephobia is irrational fear that you are being watched by a duck.

The Alabio Duck is a Precocial (meaning) Born or hatched with the eyes open, a covering of hair or down, capable of a high degree of independent activity from birth and able to leave the nest just a few hours after hatching.

The Male Alabio Ducks will guard their nest by chasing away other ducks. Once the female Alabio Duck lays 5 to 8 eggs, she will start to sit on her eggs to keep them warm so that they can hatch into baby ducklings. The Alabio Duck eggs will hatch on average within 26 to 28 days. Baby Alabio ducklings are able to fly within 5 to 8 weeks.

Features about the Alabio Ducks Bill

A "bill" is what is call a Alabio Ducks mouth. There are no teeth in the ducks bill, they have rows of thin bristles, which helps them to filter pieces of nutrition out of the water. Alabio Ducks swallow there food whole and it goes to an organ called a gizzard, were the food is first ground up and than moves on to the stomach. The different bill shapes and sizes for finding food, has over time mutated to fit each environment. The Alabio Ducks bill is flat and broad and has rows of fine incision along the outer edge called "lamellae". meaning a thin membrane, plate, scale or layer, as of cell wall or bone tissue. The larnellae helps the Alabio Duck to clutch food for feeding.

Alabio Ducks see in color with very good vision and can see well underwater. Alabio Ducks have three eyelids the third eyelid called nictitating membrane. They have a top and bottom as well as a third eyelid that is found on the side of the eye. The Alabio Ducks eyelid blinking acts as a windshield wiper to clear the eye. This helps to see when diving under water can also help the eye from drying out while flying. This is an act of constantly cleaning and keeping the eye moist.

Ducks fly will fly in a “V” shape to makes flying easier.
In captivity ducks will lay more eggs, when there is more daylight, that's why farmers will keep the lights on in the ducks house for longer periods of time.

A special feature that the duck has is its water-proof feathers, even when the duck dives underwater, its downy under-layer of feathers will stay totally 100% dry. There is a special gland called the "Preen Gland" also called Oil Gland or Uropygial, that produces oil that is near the Alabio Ducks tail which covers and spreads the outer coat of the Alabio Ducks feathers, which makes the duck water-proof.

Features about the Alabio Ducks Feet

Underneath the water-proof coat are downy soft fluffy feathers which keep the ducks body warm. Alabio Ducks keep clean by being able to turn their heads completely backwards, and put their beaks into their feathers by preening

Search the Web for More information on Alabio Duck at LookSeek.com Search