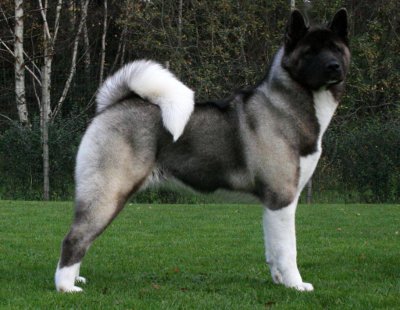 Facts about Akita Dog American, "Scientific name for Akita Dog, or domestic canine, is Canis lupus familiaris". Originally, the Akita Dog was bred in Japan for dog fight games and hunting. During the breed’s early stages, the Japanese community regarded this dog as a royal pet. Today Akita Dog enjoys the status of a national monument in the Japan. There are two different types of Akita Dogs, the Japanese Akita was originally the first breed and from the Fédération Cynologique Internationale (FCI) in Japan and in other countries around the world now a separate breed the American Standard Akita Dogs. The size and weight are different from its cousin the Japanse Akita and the American Akita allows a black mask. The original Japanese breed does not allow for a black mask.
Female is about 24 to 26 inches {60.9 to 66 cm}. The average height for the Male 26 to 28 inches {66 to 71 cm}. The average weight for the female is 75 to 110 pounds {34 to 49.9 kg} and the average weight for the male is 75 to 120 pounds {34 to 54.4 kg}
One of the health problems that the Akita is prone to hip dysplasia, both autoimmune thyroiditis and hypothyroid, immune diseases like Pemphigus and VKH, skin problems like eyes and SA {entropion, Micro,PRA,} patella and other problems with their knees
The {American} Akita Dog were first introduced to the US in the year 1937. Eight years later, the population off Akita in American soil intensified with return of soldiers who came back with this dog. Later, a mix of the breed, commonly known as the American Akita Dog was developed. Due to some distinctive features, the name of the dog was changed from great Japanese dog to American Akita Dog. These changes were made by the FCI.
Some of the features that differentiate an Akita {American} from their Japanese counterparts is the body build. The American Akita have large eyes and enormous bone structure that resembles that of a bear. On the contrary, their counterparts have the resemblance of a fox. They have a smaller triangular head with their eyes and ears set lower and carried forward.
Apart from the bodily features, the Akita Dog {America} is also quite different from the Japanese Akita from their colors. The Akita {American} may come in various patterns of colors or even several color combination. Most of the Akita {American} have pinto markings or black masks. On the other hand, the Japanese Akita is restricted only to four colors-purely white, brindle which is a patchy coloring with a streak of gray or brown, sesame or red fawn. The Japanese only consider only those species with white triangular patches on the sides of their muzzle, tail neck, cheeks, and chest or on the body as being purely bred; with the exception of the purely white Akita.
The Akita {American} are known for their courage. Acquiring this dog is a guarantee of ultimate protection and a loyal companion.
If purchasing a Akita Dog from a breeder, make sure to find a good breeder with references check at least two to three of the puppies that were purchased from this breeder.
The Akita Dog belongs to the Working Group and in 1972 it was recognized (AKC) American Kennel Club.

Search the Web for More information on Akita Dog (American) at LookSeek.com Search