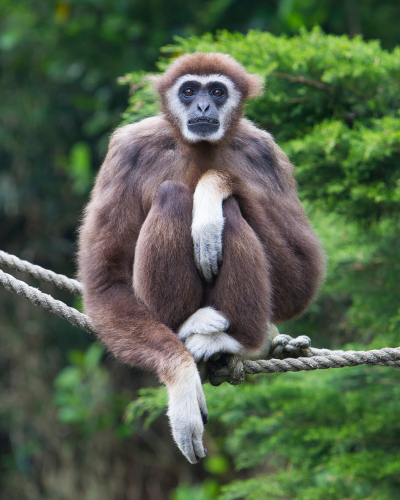 Facts about Agile Gibbon Apes. "Scientific name for Agile gibbon is Hylobates agilis". Agile Gibbon Ape is also known as the Black Handed Gibbon, is a black or red brown primate belonging to the gibbon family and commonly found in parts of southern Thailand, Malaysia and Indonesia. The encroachment of the species' habitat has led to their reduction leading the IUCN to pronounce it an endangered species.

The Agile Gibbon Ape is either black or red brown in appearance, and it has a white brow. The male has light-grey cheeks, and it is larger than the female. Agile Gibbon Ape can weigh from 4 to 6 kg (8.8 to 13.2 lbs) although research has indicated that Agile Gibbon Ape can weigh 8 kg (17.6 lbs) in captivity. Its length is 44 - 63.5 cm (17.3 to 24.8 inches) and like other gibbons it does not possess a tail. Agile Gibbon Ape has very long hands that it uses for swinging from one branch to another at a quick pace. It can swing up to 3 meters (9.8 feet) and can jump more than 9 meters (29.5 feet). Its locomotion abilities allow it to cover large areas in a short period. It spends a larger part of its life on top of the trees and rarely comes down to the ground. The Agile Gibbon Ape is capable of walking straight on its two legs when on the ground. It achieves this by placing its arms above the head for balance.

Agile Gibbon Apes primary source of food is fruits although, in times of scarcity, it can feed on leaves, insects and flowers. The family can forage for insects together, sharing insects on one tree at a time. In other instances, the female is in charge of foraging especially after giving birth. Both the male and the female Agile Gibbon Ape are responsible for taking care of the offspring and defending them from predators.

The gestation period of the Agile Gibbon Ape is seven months, and the female gives birth to one offspring. At the age of two years the young Agile Gibbon Ape is weaned, and it starts feeding on seeds just like the grown-ups. The offspring stays with the family for eight years, after which it leaves to look for a mate.

Like all primates, Agile Gibbon Apes have its way of communicating. Every morning the male and the female perform duets to mark their territory. Other pairs will respond by performing a duet. The loud calls can also be used to indicate aggression, to keep off intruders or to send a message to a member of its group. Each group has its unique call.

Efforts are being made by conservationists to protect the Agile Gibbon Apes from eminent extinction. Their main threat is human activities such as deforestation. Agile Gibbon Ape is also poached and sold as pets to individuals from foreign countries. The primate’s habitat is tropical rain forest sand dry tropical forest.

Search the Web for More information on Agile Gibbon Ape at LookSeek.com Search