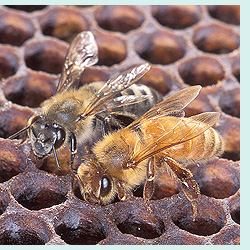 Generally the appearance of the Africanized bee is similar to the common Honey Bees, and the distinctive physical difference is you would have to have the bee at a laboratory and check the 20 different structures, and also by use of DNA and enzymes to find out exactly what type.
African honey bee bodies are covered in fuzz with a ringed abdomen with black stripes.

Morphology and Genetics of the Africanized Honey Bees

Though the African honey bees are somewhat smaller and do build small comb cells compared to the European honey bees, their hybrid is not small. The Africanized honey bees have somehow shorter wings, they are slightly shorter it makes it difficult to recognize them fronm the Honey Bee.

The Africanized honey bee acquires its killer name because it attacks animals and people who unknowingly stray in their territory, and often results to very serious injury or even death. In fact it is not necessary for you to disturb its hive to initiate an attack, they will respond to mundane occurrences including vibrations from vehicles, noise from pedestrians.

Their sting venom is just similar to the native honey bees, Africanized bees always attack in greater numbers and they will pursue their enemies for long distances. Once the bees have been disturbed, they will remain agitated for as long as 24 hours, and they will go on attacking animals and people within a quarter mile range.

Africanized bees will start foraging at a very young age and they can harvest large quantity of the pollen compared to the European honey bees. They have a high reproductive rate and their ability to gather large quantity's of food to support the survival of the large number of the larvae.

The Africanized honey bee will migrate depending on the season and can fly for long distances in search of pollen and nectar.

The Africanized honey bees are very lethal and one might wonder how farmers can deal with them. Funny enough there is a mild variety that is commonly referred to as the Gentle Africanized bees. This type does not display the hyper-defensive character. This provides an opportunity for the breeders to produce a gentler stock. Generally, Africanized honey bee are among the best choice for beekeeping but its hostile characteristics giving a greater challenge in terms of handling this type of bees.

Social Organization of the Africanized Bees

Generally the killer bee is a social insect that can survive as a lone member of a community or a colony. The Queen is the sexual productive female in a colony and it is the mother of all the drones the future queens and workers. It can lay an outstanding number of eggs, equivalent to the weight of its body.

Search the Web for More information on African Honey Bee at LookSeek.com Search