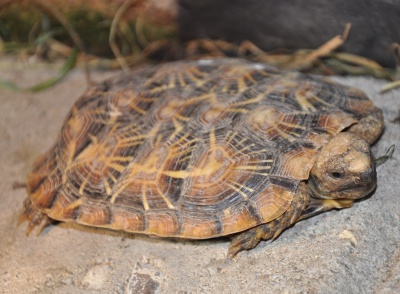 The African Pancake Tortoise can be found inhabiting most hillsides which have rocky outcrops also known as kopjes in savanna and arid thorn scrub regions. The areas ranges from one hundred to six thousand feet (30 to 1829 meters) above the sea level and includes the floristic areas around the Somalia-Massai region including the Brachystegia woodland in upland areas and arid to semi- arid Acacia-Commiphora bush land regions. The African Pancake Tortoise are also found in tiny rocky hills of the crystalline basement and low land altitude dry Savannah regions.

The African Pancake Tortoise has a uniquely flat, thin and flexible shell which usually develops up to approximately seven inches in length. Its bizarre, pancake-like, flattened characteristic makes the tortoise a sought-after animal in private and zoological collections which has led to its over-exploitation in the wild habitats. Generally, the shell bones of most tortoises’ species are solid, the African Pancake Tortoise has unusual shell bones which has several openings that makes the tortoise to be more lighter and agile than the rest of tortoise species.

The top shell of the species which is also known as the carapace is brown in color with variable patterns of radiating dark lines on each shell plate, also recognized as scutes. The scutes usually help the tortoise to camouflage in the typical dry habitat. The bottom shell, plastron often has a pale yellow coloration with light yellow rays and dark brown seams. Generally, the tortoise’s limbs, tail and head has a yellow-brown coloration.

Most of the pancake tortoise’s species live in isolated colonies. The male species usually fight in order to mark their female territories during mating seasons which occurs in the months of January and February. Typically, the large males often get higher chances to mate than the juveniles. Upon mating, the females dig nest cavities of approximately seven to ten centimeters deep in sandy soils in order to lay eggs. Usually, only one egg is laid at a time although the female species can be able to lay several eggs in a single season.

The African Pancake Tortoise eggs can take up to a maximum of four to six months in an incubator machine with young ones becoming independent immediately after hatching. Both captive and wild mature species of the African Pancake Tortoise tend to bask on the open sun and can sometimes appear not to hibernate. However, the species hides under flat rocks during the hottest summer periods. In addition, the tortoise is agile and a fast climber that prefers to stay close to its habitat home so that in case of any disturbance or falls prey to other wild species it can run seek refuge beneath the rock crevices. The African Pancake Tortoise can feed on primarily a diet consisting of dry vegetation and grasses.

Search the Web for More information on African Pancake Tortoise at LookSeek.com Search