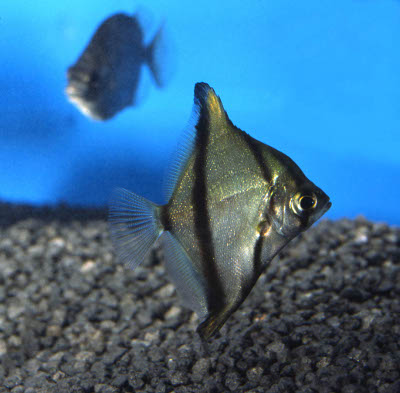 The African Moony, scientific name Monodactylus sebae, is a member of the Monodactylus family. It is a type of moonyfish. Moonyfishes as a family are sometimes called monos or fingerfishes.

They need an aquarium to be at least 75 gallons and a depth of at least two feet.
The African Moony fish prefers brackish water. It naturally lives in river estuaries and mangrove swamps in west Africa. They can be kept in freshwater aquariums. They do best when the salinity is between 2 and 6 ppt. This improves their disease resistance. Never let the salinity reach 35 ppt, the level of sea water. Periodically change out the brackish water to fresh water to mimic the natural environment. The temperature should be around 26C or 78F, and it should stay between 72 and 80F. The pH needs to be between 7.2 and 8.4.

These fish prefer to school. Moonies are low on the fish pecking order, so they need lots of places to hide like vertical drift wood or tall rocks aside from swimming in groups.

The African Moony fish can be fed a pellet diet. However, they have their best color and health when fed a carnivore’s diet of earthworms, bloodworms, brine shrimp and ghost shrimp. You can feed them frozen shrimp and such to reduce feed costs. In the wild, they’ll feed on zooplankton.

The African Moony is rarely bred in captivity, though there are aquaculture firms that have raised them in fresh water. In the wild, the young will develop in fresh or brackish water while adults migrate toward salty water. However, they are easy to take care of and maintain in the fish tank, in part due to their salinity tolerance. They have not been evaluated for a conservation status by the IUCN. They are found along the African coast from Angola to Senegal to the Canary Islands.