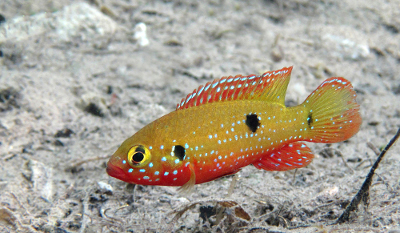 African Jewelfish are from the fish family cichlidae. Known to grow approximately 6" long. Known to be very aggressive, they feed and prey upon other fish and plants. These fish originate from Africa,the place where they get there name from. First found in the Nile and Congo rivers the African Jewelfish have migrated to the Middle East, South America, and recently have been seen in North America. Naturally found in creeks, lakes, streams, and rivers. Adapted to live in water that is partly salty and partly fresh it is no wonder they have spread so far. Many different species of jewelfish exist but they all are known to behave the same and often live in the same conditions. Know to be somewhat of a loner, the jewelfish do not have communities due to there aggressiveness. Surprisingly they are not known to attack each other unless they feel threatened. If in captivity it is suggested to not have any other fish other then there own kind in the tank with them.

Known to be omnivorus, African Jewelfish feed on insects, caridina (prawns and shrimp), and crustaceans. Also known to eat plants such as algae, and other weeds. When in captivity African Jewelfish can eat varied commercial live, frozen, flakes, and pellets. They mostly accept all forms of store fish food. Easily compared to bottom feeding fish in a aquarium, they like to eat the algae and other debris that forms at the bottom of fish tanks. When ready to breed the female jewelfish turns a stunning deep red as to let the male know its ready. The female will lay her eggs on a flat surface and will protect her eggs furiously. Killing anything that comes in too close to her eggs, Even after the eggs hatch the female will still protect her young. Great for a visual pet, but does not get along well with others.