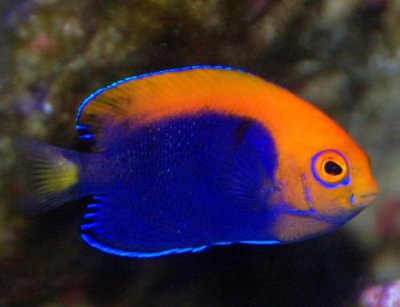 The African Flameback Angelfish, a member of the Pomacanthidae family, is so named for the bright orange stripe from its face to its tail while its sides are dark blue or black. They are only three inches long (7.6 cm) at maturity, so they can be kept in tanks as small as 24 gallons (90 liters) of capacity. Fifty gallons (190 liters) is better. The bottom should be covered with rock and sand if not live or fake corral.

The African Flameback Angelfish is suitable for beginner aquarium owners. They will eat most frozen and prepared fish foods. This African native to the Maldives. You can feed them mysis shrimp and spirulina algae. You can supplement with high quality angelfish specific preparations.

Search the Web for More information on African Flameback Angelfish at LookSeek.com Search