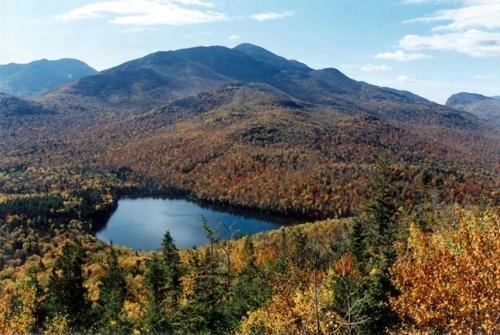 The Adirondack Park is a six-million acre patchwork of public and private lands located in northeastern New York. The area was designated in 1892 to protect the region from uncontrolled forest clearing that was common during the 1800s. Today, the Park contains a thriving mix of forests, wetlands, waterways, and human settlement.

The Adirondack Forest Preserve is defined as the 2.6 million acres of state land within the Adirondack Park. Afforded constitutional protections that prevent the removal of timber, lands within New York's Forest Preserve are rich in both recreational opportunity and ecological significance. These public lands, which range from remote backcountry to DEC-operated campgrounds, include more than 1,800 miles of marked trails available for people of all interests and abilities. Depending on park-wide land classifications and specific unit management plans, there are a variety of opportunities for public enjoyment of the Forest Preserve, including hiking, camping, canoeing, hunting, fishing, trapping, snowmobiling, skiing, mountain biking, and rock climbing.

The Adirondack Park boundary, commonly referred to as the Blue Line, contains the entire Adirondack Mountain range, as well as some surrounding areas, all within the state of New York. The park includes all of Hamilton and Essex counties, as well as considerable portions of Clinton, Franklin, Fulton, Herkimer, St. Lawrence, and Warren counties and small portions of Lewis, Oneida, Saratoga, and Washington counties as well. "The Clinton County towns of Altona and Dannemora are specifically excluded from the park by statute, due to the large prison facilities in both towns."